The Neuquen Basin - has a 6000m sedimentary column with marine and continental rocks from Triassic to Paleocene in age. The Precuyo Group, the Los Molles, the Vaca Muerta and the Agrio formations comprise almost all the source rocks. Reservoirs range from late Triassic to Late Cretaceous in age, with seals in the Jurassic and Cretaceous. The northwestern part of the basin contains mostly dry gas. Wet gas and oil appear as you go south and east.

Vaca Muerta - The primary target in the Neuquen is now the Vaca Muerta. The 30,000 sq km Jurassic and Cretaceous Vaca Muerta shale formation could contain over 10 tcm of shale gas and 16 bn bbls of shale oil and condensate. It lies primarily in the Neuquen Basin, Neuquen Province, in the central west with a small part in Mendoza Province to the north. Geographically it is 3 times the size of the Permian Basin in the USA.

Offshore - Oil and gas production offshore is limited to the eastern flank of the Austral Basin where 95% of the oil and gas is located in reservoirs of the Lower Cretaceous Springhill Formation. Potential also exists in the West Malvinas Basin to the east of the Austral. Twenty wells have been drilled in this basin but none have been commercial discoveries.

The Neuquen Basin has been producing oil since 1918.

Vaca Muerta - Bituminous shales  in the Salado River Valley were first described in 1892 by Dr Guillermo Bodenbender and named the Vaca Muerta (translated as Dead Cow) by American geologist, Charles Weaver in 1931. The formation comprises black shales, marls and lime mudstones. It is the source rock for conventional fields in the Neuquen Basin.  The discovery of the Loma La Lata field in the Vaca Muerta in 2010 by Repsol-YPF first brought attention to this tight oil and gas shale play. In development

Vaca Muerta - The formation underlies four provinces (Neuquen, Mendoza, La Pampa and Rio Negro) and is thickest in the centre of the Neuquen Basin and natural porosity can be up to 12%. However, drillers soon recognized the need to drill horizontally to best drain the shales. After 2010 gas price controls and logistical bottlenecks slowed progress but, by 2018, the Vaca Muerta had become the only full-scale shale development play outside the USA with 10% of Argentina’s wells being drilled in the play at a cost of around US$8mm each. Chevron and ExxonMobil have now committed a combined total of US$700 mm. Chevron signed an agreement with YPF in 2013, divesting its interests in the Rio Negro Province to concentrate on the Neuquen. It went on to reduce horizontal well costs by half with 3 drilling rigs active. ExxonMobil entered the region in 2011. By 2018 it had 7 blocks and planned to launch a long term pilot project in Los Toldos Block 1 South that could involve 300 wells. YPF and Petronas have also started a massive development of the Amarga Chica Block.

Other Neuquen - GeoPark discovered a conventional Neuquen Basin oil field in Mendoza Province CN-V block in 2017 with an Early Cretaceous reservoir. As part of its 35-well program in Latin America GeoPark drilled 7 wells in the Neuquen in 2017.

Vaca Muerta - Output of oil and gas from the Vaca Muerta is set to grow rapidly as it declines from conventional fields although there are bottlenecks ahead. These include shortages of proppant, lack of water, transport infrastructure, and of rigs and pumping equipment as well as potential recessions in the economy. A previous contract to import gas from Bolivia until 2026 is also a burden.

However, it is forecast that both drilling and fracturing will steadily increase, especially of horizontal oil wells with oil production reaching over 250,000 bbls per day by 2025 mostly from the oil-rich Loma Campana part of the play whilst investment continues to increase to around 2030 by when the best areas will be fully exploited. 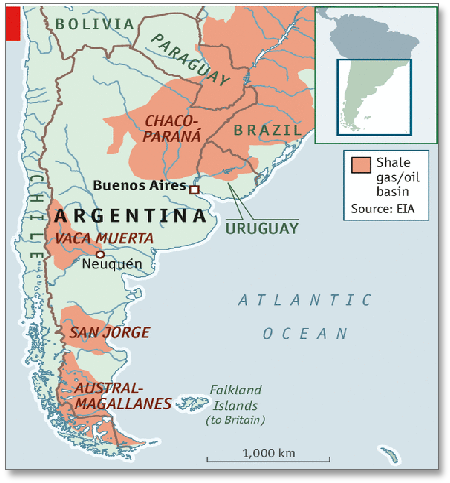