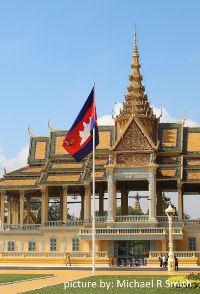 Cambodia (Kampuchea or The Kingdom of Cambodia) is in the south of the Indochina Peninsula bordering Thailand (northwest), Laos (north), Vietnam (east), and the Gulf of Thailand (southwest).

The first recorded civilisation dates from 400 BC. From 300 AD the Indianised states of Funan, and then Chenla developed. In 802 AD the Khmer Empire emerged in Angkor, the largest city in the world at the time, and Hinduism was replaced by Buddhism.

Angkor fell to the Ayutthaya Kingdom in 1432 and Cambodia became a vassal state, engaged in repeated wars with Siam (Thailand) and Vietnam until a treaty between France and Thailand in 1867. Then part of French Indochina, it finally gained independence in 1953 after occupation by Japan from 1941 to 1945.

Cambodia was neutral in the Vietnam War but was used as a sanctuary which led the USA to begin bombing in 1969. In 1970, after a US-backed coup, Vietnam invaded, and the disarray allowed the communist Khmer Rouge to grasp power.

From 1975 the Khmer Rouge instigated a genocide until 1979 when it was overthrown by another Vietnamese invasion and replaced by the Peoples Republic of Kampuchea.

Peace accords were signed in 1991 followed by a 2-year UN mandate. Cambodia now has a growing economy based on agriculture and manufacturing with foreign investment.

Much of Cambodia is covered by a low central plain, including the Tonle Sap (Great Lake) and the upper reaches of the Mekong River delta. This is surrounded by thinly forested upland plains, rising to elevations of around 200m. In the east the Mekong River Delta merges with highlands that extend into Laos and Vietnam.

In the southwest two upland areas, the Krâvanh Mountains and the Dâmrei Mountains, form a highland region that covers the area between the Tonle Sap and the Gulf of Thailand. Here Phnom Aural, the highest peak, reaches 1,813 m. In the north the plains abut an extensive west-east trending sandstone escarpment which rises to 550m and marks the southern limit of the Dângrêk Mountains.

The first wells were drilled in Cambodia in 1972 but activity ceased in 1974 when the Khmer Rouge took over. Offshore exploration began again in 1994 after the country achieved stability. Oil has been discovered in several shallow water wells, the most significant being the 2005 Apsara discovery in Block A within the Gulf of Thailand Khmer Basin.

There is almost certainly potential for both oil and gas production but this has still not been realised largely because of border disputes with Thailand and Vietnam. Production is forecast by Globalshift to begin within a decade and several linked developments are likely to follow.

The lack of older sedimentary basins over most of the onshore region suggests that Cambodia is unlikely to achieve production away from the Gulf. 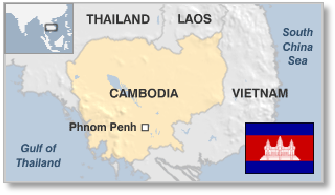 Officially a multiparty monarchy operated as a parliamentary representative democracy, the country remains dominated by the authoritarian Prime Minister of the Cambodian People's Party.

The King of Cambodia is head of state and the prime minister is appointed by the king with the approval of the lower house of a bicameral Parliament.

This comprises the lower house, a 123-seat elected National Assembly and an upper house, a 61-seat Senate part appointed and part elected by the 24 provinces.

The oil and gas industry is overseen by the Ministry of Mines and Energy (MME) through the Cambodian National Petroleum Authority (CNPA). The government is considering whether to establish an NOC.

Cambodia is a member of the Association of Southeast Asian Nations (ASEAN) which it joined in 1999.