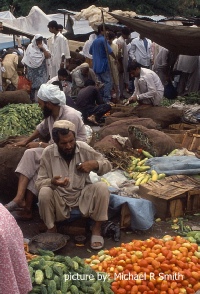 Pakistan (the Islamic Republic of Pakistan) has a coastline along the Arabian Sea and Gulf of Oman in the south and is bordered by India (east), Afghanistan and Iran (west), and China (northeast).

Migrants into the Indus Valley formed civilisations before 1800 BC. Hinduism was founded by the Vedic Civilisation before later regional powers introduced Buddhism.

From 711 AD the area was ruled by a series of Muslim empires with migrants establishing the powerful Delhi Sultanate in 1206. The sultanate repulsed the Mongols but fell to new migrants in 1526 who formed the Mughal Empire. Declining over a long period after 1707, it was partly replaced by the Sikh empire in Punjab.

The English East India Company had subdued most of the region by the 1820s. Rifts developed between the religions, eventually leading to establishment of the pro-British Muslim League in 1901. Muslim states in the northwest campaigned for a state independent of India and this was created in 1947 but marked by violence and mass migrations.

After independence the country suffered repeated wars with India, periods of military rule, and corruption. Civil war in 1971 also led to the secession of Bangladesh.

Pakistan now faces Islamic terrorism although growth of its semi-industrial economy has been strong.

The geography of Pakistan is diverse. In the north are mountain ranges including the Karakoram, Hindu Kush and Pamir. These contain 5 peaks over 8,000m, notably K2 and Nanga Parbat.

South of the mountains is the Balochistan Plateau in the west and the Thar Desert in the east. The Indus River and its tributaries run through the country from the Kashmir region to the Arabian Sea and expansive alluvial plains lie either side of the valley in both Punjab and Sindh.

Geologically the country is located in the Indus-Tsangpo Suture Zone overlapping the Indian tectonic plate in Sindh and Punjab on the southeast and the Eurasian plate in Balochistan and most of Khyber Pakhtunkhwa on the northwest. Gilgit–Baltistan and Azad Kashmir in the northeast lie along the edge of the Indian plate and are prone to earthquakes.

The country began producing oil from the Upper Indus Basin in 1922 on the so-called Potwar plateau but output remained low until the 1980s when new fields came onstream and production also began from the Lower Indus Basin in Sindh. However, oil output has never been substantial. New discoveries in the North West Frontier region area are now stemming overall decline.

Pakistan has large gas reserves, especially in the Middle Indus where many gas fields have come onstream since 1955. Associated gas is produced from the other areas and steady growth in output is expected by Globalshift to continue.

There is no offshore oil or gas production, although the country does have potential for gas fields in deep waters within the Indus Delta. 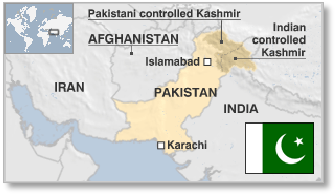 Pakistan is an Islamic parliamentary federal republic. The President, elected by an Electoral College, is head of state and commander of the Armed Forces, although appointments are made by the Prime Minister.

The oil and gas industry is overseen by the Ministry of Petroleum & Natural Resources.

Within the Ministry are; The Geological Survey of Pakistan; Government Holdings Private Ltd which holds a fixed working interest in each concession; Oil and Gas Development Company (OGDCL), which is the NOC; and Pakistan Petroleum (PPL) which inherited the assets of Burmah Oil in 1950.