Licencing Rounds - The first offshore licensing round was held in 2009 (Uruguay Round 1 2009). Eleven blocks were available but only 2 were awarded with no well commitments (Areas 3 and 4) both to YPF. Shell farmed-in to these blocks but has since pulled out.

Uruguay Round 2 followed signature of contracts for Round 1 and completion of extensive multi-client geophysical surveys. The Round called for bids for 15 offshore areas in September 2011. Data on the blocks were sold by ANCAP who received 19 offers for eight of the 15 blocks offered, from 9 companies in March 2012.

The awarded areas are located in all 3 offshore basins. Areas 6, 11 and 12 were awarded to BP, areas 8, 9 and 13 were awarded to BG, area 14 was awarded to Total and area 15 was awarded to Tullow. Statoil farmed into the Tullow block. Commitments included a deep water exploration well to be drilled by Total in Block 14 and extensive seismic surveys over a 3-year period, with optional further periods. BP has since relinquished its areas.

Uruguay Round 3 was  launched in 2018 and an open offshore round followed in 2019 in which large areas from shallow to ultra-deepwaters were available. 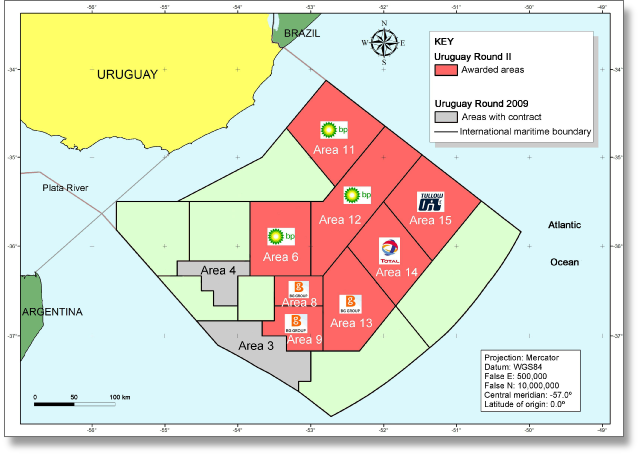 Uruguay is underlain by a Precambrian shield which is part of the Río de la Plata craton; an extensive area of stable crystalline basement that spreads across Uruguay and large areas of eastern Argentina and southern Brazil. In the north the shield is covered by younger volcanic rocks and sediments deposited during the initial opening of the South Atlantic up to Cretaceous time.

Onshore - Two sedimentary basins are recognised onshore; the Norte Basin and the Santa Lucia basin. The Norte Basin is a sub-basin of the Parana Basin, a large intra-cratonic area which extends over the north of Uruguay, the south of Brazil, the northeast of Argentina and the south of Paraguay.

It has an early Devonian to Late Cretaceous fill of shales, siltstones, sandstones and volcanics. A number of wells were drilled in the basin in the mid-1950s and mid-1980s but there appears to be no conventional petroleum potential. However, some shale oil potential may be present in the Permian Mungrullo Formation especially near the Brazilian border as determined by several hundred shallow wells drilled in the 1970s and 1980s.

The Santa Lucia Basin is an intra-cratonic basin, pull-apart basin which developed during the Jurassic and Cretaceous in the south of the country. It primarily contains sandstones and volcanics and Globalshift believes it is unlikely to contain viable source rocks.

Offshore - In the offshore waters of Uruguay sedimentation within the Atlantic rift system has continued through to the present day. Three basins are recognized; Punta del Este, Pelotas (southern part) and the Oriental del Plata.

These basins were created during the break-up of Gondwana and opening of the Atlantic Ocean. The Punta del Este Basin in the west is an aborted rift, perpendicular to the continental margin. The Pelotas Basin in the east is the flexural border of the south Atlantic rift. Since the Palaeocene both basins have developed as one. The Oriental del Plata Basin in the south underlies ultra-deep waters over a basement of transitional and oceanic crust.

Only 2 shallow water wells (dry holes) had been drilled up to 2016, both in the Punta del Este Basin. Very little is known about the Oriental del Plata Basin. A deep water well (Raya-1) was drilled in 2016 by Total. It was a dry hole although it was notable as the deepest water well ever drilled.

Drilling in Uruguay began in 1954. Several dry wells were completed in the onshore Norte Basin up to 1958 followed by a long period of inactivity. From 1985 to 1987 five further wells were drilled but with no success. A number of stratigraphic wells have been drilled more recently in addition to some shallow tests for shale oil.

Only 3 offshore exploratory wells have been drilled. Two were drilled in 1976 in the Punta Del Este basin. Total drillied the Raya exploration prospect in Block 14 in the deep waters of the Pelotas Basin in 2016. It was the world’s deepest water exploration well at 3,404 m.

Despite this newer activity the region remains high risk with limited well data and no discoveries. Combined with the effect of lower oil prices Globalshift forecasts no oil or gas production from the country, onshore or offshore, at least in the short and medium term. 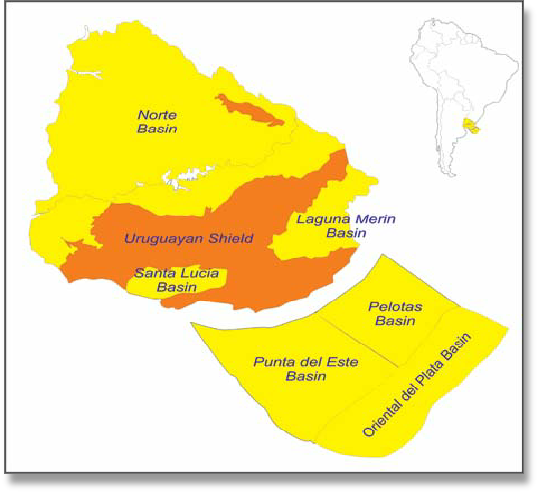