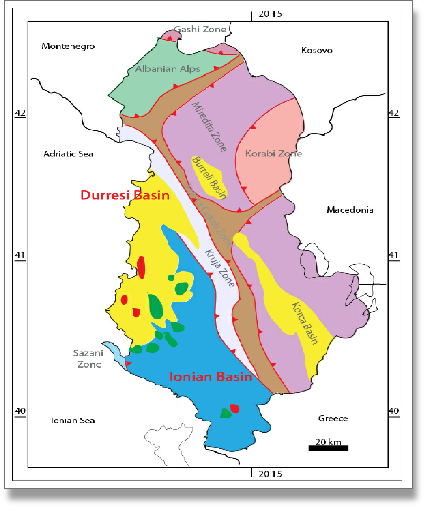 Albania lies within a tectonically active and complex geologic region associated with thrust faulting along the Adriatic-Apulian plate boundary. It is a foreland fold and thrust belt system that includes Mesozoic to Eocene carbonate sequences of the Ionian Basin in the south and overlying foreland basin deposits of the Durresi Basin in the centre and north.

The lower sequences are deformed within three Tertiary thrust sheets that verge towards the Apulian foreland and produce mountain ranges along the Balkan Peninsula.

The Durresi/Ionian Basin - was created by anticlockwise rotation of the Apulian foreland along with its uplifted promontory in the southwest of Albania which acted as a buffer to Ionian basin thrusts during the Oligocene to Pliocene.

The thrusts were uplifted and exhumed in the south while propagating in the north towards the foreland before being overlain by the Durresi foredeep basin during the Miocene and Pliocene.

Oil source rocks are present in Triassic and Jurassic sediments of the Ionian Basin buried beneath the southern part of the Durresi Basin. The beginning of oil generation is related to this burial.

Two types of reservoirs exist. Deep water carbonates of Late Cretaceous to Eocene age are fractured with vuggy porosity while flysch and molasse deposits of the foreland basin also act as reservoirs.

Surface occurrence of bitumen in Albania was recorded by the Greeks and Romans. In 1875 the Turkish Government granted rights to exploration in the Selenica region to a French company which mined and exported asphalt for road construction until 1918. Meanwhile surface mapping by Austrians and Italians was carried out and a geological map was compiled for northern Albania.

An oil seep seen at Drashovica near Vlora led to the first well in 1918. The well produced 20 to 30 bbls per day for 2 years from Oligocene flysch at shallow depths. It was abandoned in 1920.

In 1925 the Albanian government awarded further concessions and drilling was carried out in the areas where seeps and bitumen impregnation had been mapped. The wells identified a number of potential fields including Europe’s largest onshore oil and gas field, Patos (later Patos Marinze), drilled in 1926 in the Durresi Basin, and the nearby Kucova field. Both have reservoirs in Miocene sandstones.

Kucova was developed in 1935 but most of Albania’s oil has been produced from Patos since 1939. In 1951 Russians acquired the first onshore seismic data and in 1957 the Marinze field was discovered adjacent to Patos.

This was followed in the early 1960s by a number of other oil and gas discoveries with deep carbonate reservoirs such as Visoka in 1963, Gorisht in 1966 and Ballsh in 1967. Gas discoveries were also made in molasse sediments including Divjaka in 1963 and Frakulla in 1965.

In the 1980s the Albanian state company DPNG took responsibility for mapping the coastal zone and further gas discoveries were made including Balaj-Kryevidh in 1983, Durresi in 1986, Povelca in 1987, Panaja in 1988 and the Delvina gas and condensate field in the south in 1989.

Operations in all the developed fields relied on ancient Russian and later Chinese built vehicles, pumps and facilities until the 1990s when Western companies were first allowed to invest.

After 1990 the country opened itself to foreign investment. A number of companies took out onshore and offshore licences, and large volumes of seismic were acquired followed by several exploration wells.

A small non-commercial discovery of condensate and biogenic gas in Upper Miocene sandstones was made offshore by the A4-1X well drilled in 1983 by Agip and Chevron. The first onshore discovery by western companies was Shpirag in 2001 within the Sqepuri subthrust which contained light oil in a fractured reservoir of Late Cretaceous to Eocene age.

A number of companies have licenses to operate onshore and offshore which has led to a tripling of the country’s heavy oil production since 2004 using modern pumping systems and horizontal drilling.

Exploration activities have increased, both onshore and offshore, with operators using modern seismic data. Shell is also evaluating the potentially significant, light oil discoveries in the Shpirag and Molisht areas.

Production of oil from Albania probably peaked in 1974 and Globalshift does not forecast any future growth as the old fields continue to decline. Gas output however, currently at a low level, could grow significantly as new investment in associated gas and complex free gas fields in the Ionian Basin are developed.