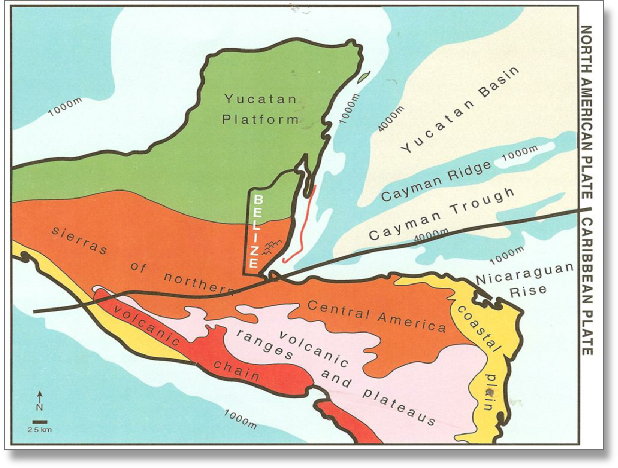 Petroleum exploration in Belize (then British Honduras) began in the 1930’s when licenses were granted to a number of oil companies including Shell, Esso, Texaco, Gulf Oil, Anschutz and Chevron covering both onshore and offshore areas.

The first exploration well, Yalbac-1, was drilled by Gulf Oil in the Yalbac Hills in the Cayo District in 1956. Seismic surveys were also run offshore and onshore. By the year 2000 around 50 exploration wells had been drilled (34, onshore and 16, offshore). However, all were dry or had only minor oil shows.

The most significant was the Eagle-1 well drilled in 1984 in Belmopan, which recovered around 3 bbls of light oil when production tested. The last well drilled during this period was Gladden-1 by the Dover Consortium in 1997 in the Glovers Reef area.

tIn 2000 an oil seep was discovered at a depth of 40m in a water well drilled at Calla Creek in the Cayo District. Subsequently an exploration license was granted to Belize Natural Energy (BNE) which made the first commercial discovery of light oil in 2005 at Spanish Lookout in the Mike Usher-1 well.

BNE developed it as the Spanish Lookout field and later made another commercial discovery of light oil in 2008 in the Never Delay-1 well. This became the Never Delay oil field. Oils from both fields are trucked to an export facility at Big Creek and shipped and sold in the USA.

Oil output has declined rapidly since the first oil field (Spanish Lookout) went onstream in 2005. Although some stabilisation and recovery is expected in the 2020s (with higher oil prices), production is unlikely to reach again the peak output of a little over 4,000 bbls per day established in 2010. Drilling levels are also expected to remain low.

No gas production is forecast by Globalshift for Belize and the ban on offshore drilling (to protect the coral reef) precludes any potential output from offshore waters.

BNE is the only producer of oil in Belize. However, a number of companies hold exploration licenses which occasionally carry out seismic surveys and drill exploration wells.