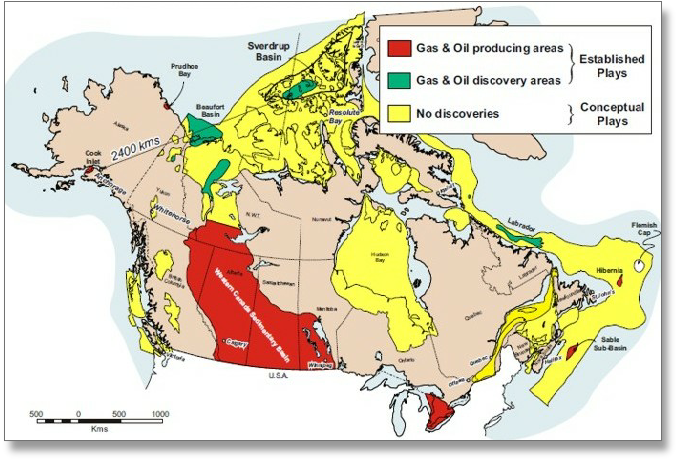 Surface oil was recorded in Canada in 1778 at the Athabasca oil sands in Alberta. Wells that produced oil commercially were first drilled near oil seeps in Ontario in 1858 (a year before the Drake well in the USA). The country also produced oil from shale deposits (Albertite) in New Brunswick in the mid-1800's. Abraham Gesner distilled liquid fuel from this Albertite, inventing kerosene in 1846, which was used to replace whale oil for lighting.

As conventional oil use grew in Ontario during the 1880's Canada built the world’s first petroleum complex at Petrolia which, up to 1897, supplied nearly all of Canada’s oil products, including lubricants, kerosene, gasoline and chemicals for food, medicine, and industry, with exports also going to the USA and and Europe.

Commercial oil production was achieved in New Brunswick at Stoney Creek in 1884 and wells are still producing from this area. Meanwhile the first gas well in Alberta was drilled in 1883 at Alderson (Langevin Siding) by the Canadian Pacific Railway (during a search for water). By the early 1890s further wells in this area had been drilled and by 1908 pipelines were transporting gas from the Bow Island gas field to Calgary.

The Alberta oil boom began in 1914 when the Dingman-1 well was drilled near Turner Valley. Between 1920 and 1947 there were further significant shallow oil discoveries made in Alberta. Also in 1920 the Norman Wells field was discovered in the North West Territories along the Mackenzie River.

The most significant early discovery in Canada was made in 1947 by Imperial Oil which drilled the Leduc-1 Devonian oil discovery in Alberta. In 1951 the first commercial oil discoveries in Manitoba and British Columbia were made, followed by Saskatchewan in 1953. Output began to grow steadily primarily from the Albertan part of the West Canadian Sedimentary Basin.

Dr Karl Clark had pioneered the extraction of oil from tar sands by the hot water process in 1921 and pilot plants were built in 1930 and 1949 run by the Alberta Research Council. Great Canadian Oil Sands Ltd (which became Suncor) then began production of the Athabasca tar sands north of Fort McMurray in 1967.

Canada's conventional oil production has been dominated by output from the Western Canadian Sedimentary Basin of Alberta, Saskatchewan, British Columbia and Manitoba but this has been declining since 1974.

However, commercial oil sands production from the Athabascan deposits has progressively made up the shortfall with capacity, converted to syncrude, reaching over 2 mm bbls per day. Small volumes of light oil from tight reservoirs including shales, have also been produced from Alberta for many years with output increasing substantially since 2010.

Offshore and the Arctic - Off the west coast, after Shell drilled offshore British Columbia in 1966 without success, a moratorium was placed on further drilling to protect the environment. This moratorium is still in operation.

Off the east coast gas was found on Sable Island off Nova Scotia in 1967 followed by oil at Cohasset in 1973. Cohasset went onstream in 1992 but has now been abandoned. The Sable Island fields started producing gas in 1999.

Several significant oil fields were also discovered off Newfoundland in the Grand Banks region, the first being Hibernia in 1979, followed by Terra Nova in 1984. The Hibernia field came onstream in 1997 and a number of other fields are now in production or in development whilst exploration is also being carried out further north and offshore in deeper waters.

Meanwhile in northern Canada in the Beaufort Sea and MacKenzie Delta areas gas was discovered at Taglu in 1971 and oil at Amauligak in 1984. Similarly, a number of finds have been made on Arctic Islands such as gas at Drake Point in 1969 and oil at Bent Horn in 1974. The latter came onstream in 1985. Otherwise Arctic oil and gas remains undeveloped due to the huge costs involved and ongoing environmental issues.