The oil fields of Czechia are located in the Vienna Basin of Moravia in multiple reservoirs at up to 2,800 m depth. Sandstones of the Middle and/or Upper Badenian in the northern part of the basin are the most productive of oil. A large almost depleted field (Hrušky) now serves as underground gas storage. Oil may also be present in the Moravian part of the Carpathian foredeep.

Associated gas is mostly found in the south Moravian part of the Vienna basin but in northern Moravia between Pøíbor and Èeský Tìšín gas accumulations are present in weathered Carboniferous paleorelief.

CBM, of Carboniferous origin, is also  extracted during degasification of coal seams of the Czech part of the Upper Silesian coal basin.

The first drilling in eastern Czechia (Moravia) within the Vienna Basin occurred in 1900. Although some oil shows were found near the village of Hodonin, activity ceased until 1919 when the Moravian Exploitation Company began drilling 12 wells on the Nesyt estate. Small amounts of oil were produced.

During the Second World War Germany took over operations and the DEA corporation (Deutsche Erdöl A.G.) developed a business within Bohemia and Moravia and drilled a large number of wells.

After the war in January 1946 the Czech Oil Plants (ÈNZ) residentiary in Hodonin was created with further institutions in other localities maintaining production at around 1,000 bbls per day. These were replaced in 1953 by two new companies which were both shut down in 1989 after the fall of communism.

On 1st April 1990 a state company of the Moravian Oil Industry was created in Hodonin. 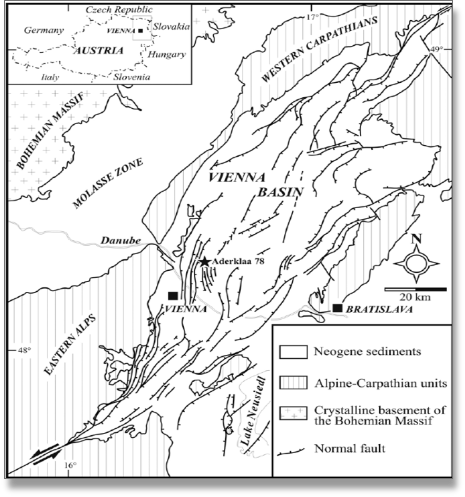