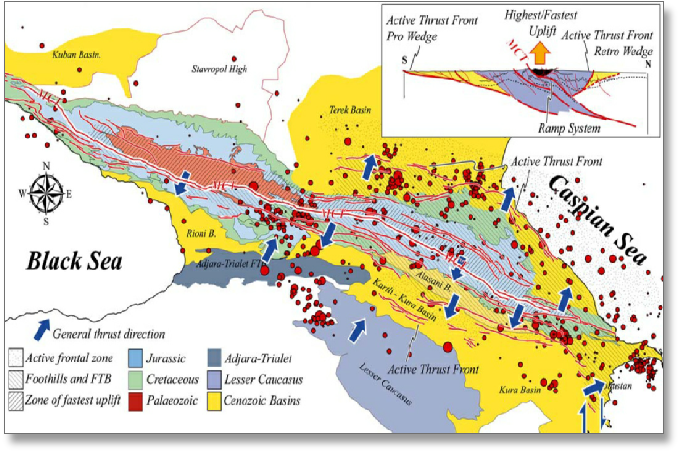 Within this geological suture lie two basins; the Rioni Basin in the west that stretches offshore into the Black Sea, and the Kura/Kartli Basin in the east forming the western end of a geological axis that runs from Tbilisi to Baku in Azerbaijan where it is known as the Kura Basin.

Rioni and Kartli/Kura Basins - Georgia’s basins are squeezed between two thrusted boundaries. Globalshift recognises that the sedimentary successions are similar to those of the oil productive regions of the Northern Caucasus in Russia but significantly more disrupted. Source rocks comprise the widespread Oligocene to Lower Miocene Maikop shale and shales in the Upper Eocene. Potential oil bearing Lower Jurassic shales are also present.

The fields are structurally complex. Most were discovered on the basis of seeps and surface geological mapping and they are difficult to image on seismic data due to their complex fault patterns and the erratic quality of their reservoirs. The geology of the offshore part of the Rioni basin is little known as few wells have been drilled.

Surface oil seeps and shallow oil pits have been exploited in west and east Georgia since the Middle Ages. In 1869 drilling was started by the Siemens brothers, who acquired licenses in the southeastern Shiraki, Mirzaani and Eldari areas on the Baku-Tbilisi axis (Kura basin). They were searching for extensions to the oil finds of Azerbaijan. These first wells (around 180) were drilled up to 38m deep and produced less than 20 bbls of oil per day. Some oil was also produced in Guria in west Georgia.

Total production from Georgia reached 14,000 bbls in 1876 from roughly 70 wells but had dropped to 8,000 bbls in 1890 and was negligible by World War 1. Proven reserves were limited and old technology could do little to reverse decline.

In 1928 a western European mining consortium drilled the first deeper well to 540m which flowed oil from a Miocene reservoir. The state-owned Georgian Oil Trust was then established in 1929 to develop this discovery at Mirzaani.

In 1962 the much deeper Taribani field in east Georgia was drilled but flow rates per well only averaged only around 10 bbls per day. In 1967 oil and gas was discovered in a deep well in an Eocene reservoir in the Teleti area, south of Tbilisi, and this led to first commercial gas production in Georgia.

Exploration now focused on Cretaceous sediments, which were the main producer in the Russian North Caucasus. In 1974 a well in the Samgori area in the west (Rioni basin) targeted the Cretaceous but instead discovered Georgia’s biggest oil field in Middle Eocene fractured volcanics. Two hundred wells were drilled and the Samgori field delivered total production of 172 mmbbls. Some wells achieved over 3,500 bbls per day.

Total output from Georgia reached a peak of 59,000 bbls per day in 1982 but such success has not been repeated. Production rates for the country dropped sharply in the second half of the 1980s.

In the early 1990’s, after independence, on and offshore Georgia was divided into blocks which were acquired as PSAs by 15 small companies in 1994. However, all these companies failed to improve production levels, managing only around 1,000 bbls per day from existing fields. In fact no new commercial discoveries have been made since the Mtsare Khevi gas find in the Kura basin in 1989.

Activities are now focused on improving output from old fields and discoveries. Currently, oil and gas exploration is carried out by the Georgian Oil and Gas Corporation (GOGC) in the Iori Valley and Samgori and by small American companies, dominated by Frontera.

The key areas are Taribani (light oil), Lake Sazare and Mtsare Gorge (heavy oil and gas) and mountain ridges such as Vashlovani, Pkhoveli and Algeti. Blake Oil and Gas (formerly Canargo) produces oil and gas from Ninotsminda (discovered in 1979), and oil from Nazvrevi, Norio and Rustavi.

The Soviets tried to explore for oil and gas on the Black Sea shelf of Georgia but did not drill any wells. In 2005 a dry well was drilled by a consortium including Anadarko and BP in shallow waters near the Batumi-Guria region but the license was then abandoned. Further north there may deep water potential but no wells have been drilled in this disputed zone off Abkhazia.

Oil has been transported through Georgia from Baku for hundreds of years with Batumi becoming an oil port late in the 19th Century. Georgia now hosts the important BTC pipelines which run from Baku to Ceyhan in Turkey.

Oil and gas production both peaked in Georgia in 1982 and there is little chance that these levels will be achieved again except by a chance discovery of a field to match Samgori.

Activity is now focused on improving production rates from old fields (when the oil price allows) and exploration of complex structures in proven petroleum systems. Deep Jurassic potential, within reservoir beds intercalated in the Maykop shales, is possible and the country may also have shale oil and shale gas potential.

Potential prospects offshore in the Black Sea are unlikely to be drilled in the short or medium term.