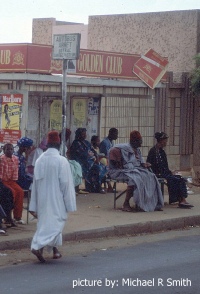 Waiting at a bus stop

Guinea-Bissau (officially the Republic of Guinea-Bissau) is bordered by Senegal to the north and Guinea to the south and east. The Atlantic Ocean forms its western border.

The region was on the fringes of a number of African kingdoms prior to the arrival of the Mandinka from the north in the 12th century. It became a province of the Mali Empire in 1235 ruled by the commander of Gabu. From 1537, when the Mali Empire declined, Gabu became an independent kingdom, trading slaves with the Portuguese.

Gabu was defeated in 1867 by Fulani Muslims who, in turn, were suppressed by Portugal who had set up set up trading posts on the coast (known as the Slave Coast) in the 16th century. The whole country was finally absorbed into Portuguese Guinea at the end of the 19th century.

With support from communist countries an armed rebellion of the population began in 1956. The rebels took military control over the interior until independence was declared in 1973 and recognised in 1974. Bissau was added to the country's name to prevent confusion with Guinea.

Guinea-Bissau has had a history of political instability since independence and the country is very poor depending mainly on agriculture with fish and nuts as its major exports.

Guinea-Bissau is a generally low-lying country with its highest point at just 300 m. The terrain is mostly low coastal plain with swamps of mangroves rising to forest and savanna in the east. Offshore an extensive carbonate shelf zone eventually dips beneath the Atlantic Ocean.

A large, undeveloped, heavy oil accumulation was identified offshore in 1967 (Dome Flore) in Senegal that overlaps into Guinea-Bissau and now lies in a jointly owned area; the AGC. Exploration has also been conducted onshore to find similar fields. A small oil field, Sinapa, was discovered outside the AGC in 2004 in a salt-related structure.

A few wells have been drilled in deep waters and the country may have prospects analogous to a field discovered in Senegal to the north in 2014 which contains oil bearing Cretaceous basin floor fans and shelf edge to slope clastic deposits. Similar plays have also been tested elsewhere along the West Africa margin.

However, the country still has no commercial oil or gas resources, onshore or offshore. It is unlikely to ever achieve production from the onshore Senegal or Bove basins.

There is a possibility for offshore production from shallow or deep waters, but not in the short or medium term, and no reserves has been allocated by Globalshift. 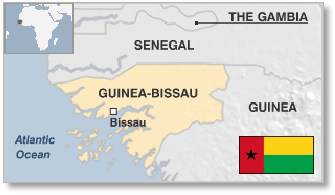 The president of Guinea-Bissau is head of state and the prime minister is the head of government. Since 1974, no president has successfully served a full five-year term.

A 100-member unicameral National People's Assembly is elected for a 4-year term.

The AGC Management and Co-operation Agency oversees and administers activity in the joint maritime zone with Senegal.

Empresa Nacional de Pesquisa e Exploração Petrolíferas, E.P. (Petroguin is the NOC, incorporated in 1986, and operating under the supervision of the Ministry of Mines and Natural Resources. Its role is to promote and administer the petroleum resources of Guinea-Bissau and is the state concessionaire.