The Mumbai Basin - is a divergent passive continental margin basin. It is mainly offshore on the west coast covering an area of over 170,000 sq kms. It is the offshore extension of the Cambay Basin and includes part of the Gulf of Cambay.

Grabens and horsts formed during rifting of the Indian Plate from Madagascar in the Upper Jurassic and Lower Cretaceous. This was followed by large scale volcanic eruptions (as seen in the Deccan Traps) and further rifting and marine incursions, giving rise to a range of alluvial and deltaic deposits. From the Eocene to Middle Miocene carbonate platforms built up intermittently on the shelfal highs while the graben areas remained as depocentres.

After the Middle Miocene younger structures were formed and westwards tilting began followed by an influx of clastics into the basin as India began to collide with Asia.

The basin has a NW-SE trending horst-graben geometry with several tectonic blocks. These are the Surat sub-basin (Tapti-Daman Block), the Diu Arch, the Heera-Bassein Block, the Platform/Shelf area, the Ratnagiri Block, and the Shelf Margin sub-basin.

Several large oil and gas discoveries are present, within Miocene carbonates in particular (the Mumbai High field), in other Tertiary reservoirs (the Mukta, Bassein, Panna, Daman and Mahuva formations) and clastic fractured basement. Source rocks are in the Upper Paleocene to Lower Eocene clastics of the Panna Formation with seals provided by widespread shale intervals and cemented carbonates.

The Kutch basin - is a Late Triassic to Cretaceous rift related to the separation of India and Africa along the E-W Delhi Trend. It evolved into a passive margin basin during the Cenozoic.

In the offshore Kutch Basin the KD-1 well in 1984 was the first discovery, flowing oil and gas from Eocene limestones and sandstones. The GK-22 well drilled gas in Cretaceous sandstones in 1992 and subsequently 2 wells, GK-39 and GK-22C, both drilled in 2004, identified significant gas reserves within similar sediments of Late Jurassic to Early Cretaceous age. Well GK-28 then discovered gas in 2009 in a Miocene-age reservoir and the first oil in the basin was identified in underlying Cretaceous sediments in 2010. Further gas and minor oil discoveries, have since been made in this area.

Exploration in the Mumbai Basin is mature with all the major fields in decline. However, potential remains, particularly for gas, adjacent to these fields where recent discoveries include the Cluster 7 group of wells which was being developed in 2019. In addition fractured basement plays, heterogeneous basal sands, the Pliocene along the shelf edge and IOR/EOR techniques can all lead to new output to slow overall decline.

In the Krishna-Godavari Basin the main focus is on the KG-DWN-98/2 Block where ONGC are planning cluster developments. Cluster II is expected to commence production in 2020 and Clusters- I and -III have long term gas potential along with the Deen Dayal field. Reliance and BP will bring onstream other fields in DWN-98/3 Block in 2021 including the R-series (Dhirubhai-34). Dhirubhai-55 (MJ) is planned for 2022 along with satellites (2,6,19 and 22) followed by 29 and 30. Note that the D6 (MA) declined faster than expected and was shut-in in 2018.

Finally, 2 Kutch basin discoveries (GK28/42) are due to be put onstream in the early 2020s by ONGC as a cluster development after a period of exploration to find additional incremental reserves. Some subsequent growth is possible. 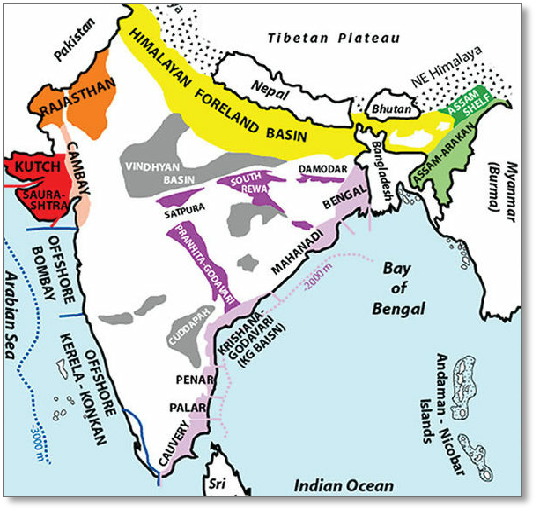