Oil Shales - Jordan has significant volumes of oil shale underlying over 70% of its territory and the Natural Resources Authority (NRA) has done extensive geological studies to delineate the reserves. The most important deposits are located in the west-central region with another near the northern border (Yarmouk), and a third in the Ma'an district in the south. The El Lajjun oil shale deposit in the west is potentially the largest.

Attempts to develop the resources have not yet achieved large scale production of energy although they remain part of the national energy strategy (both shale oil extraction and oil shale combustion for thermal power generation).

The Hamza oil field is 100 kms southeast of Amman close to Saudi Arabia. It began production from 4 wells in 1984 and  has produced just under 1 million barrels of 32 API oil from 2 reservoirs (Shuaib and Hummar) at a maximum field rate of 450 bbls per day (bopd). No significant gas is produced. Oil is transported by road tanker to the Jordan refinery near Amman.

Transeuro were awarded a Production Enhancement Agreement to redevelop the Hamza oil field in 2016 following an open bid process. Production had declined to around 20 bbls of oil per day. The license area surrounding Hamza of 100 sq kms includes a further 4 wells that have tested oil and these will also be evaluated. The last well drilled in the area before this award was in 1989 but seismic data over the license area have identified 4 other exploration prospects.

Oil Shales - Eesti Energia signed an MOU in 2006 with rights to study the El Lajjun oil shale. Jordan Oil Shale Energy Company was established as a subsidiary hoping to produce up to 36,000 bbls per day from a plant using Enefit technology. In 2009 the Ministry of Energy and Mineral Resources signed a concession agreement with Jordan Oil Shale Company JOSCO), owned by Shell, granting exclusivity for deep oil shale exploration. JOSCO will use Shell’s In-Situ Conversion Process (ICP) that converts oil shale reserves to crude oil by heating the oil shale through thermal conduction using horizontal heaters. In 2015 JOSCO completed its first ICP field test, although significant further work is required before a commercial project can be achieved.

Karak International Oil (KIO) signed a contract in 2011 covering 33 sq kms in the El Lajjun area, using Canadian Technology whilst Saudi Arabian Corporation for Oil Shale (SACOS) signed a contract in 2014 for shale oil production through surface retorting over an area of 11 sq kms in the Attarat area using Russian Technology. In 2017, the Ministry of Environment approved a US$2.1 bn project for Eesti Energia to build the first oil shale-fired power plant (500MW) in the country. 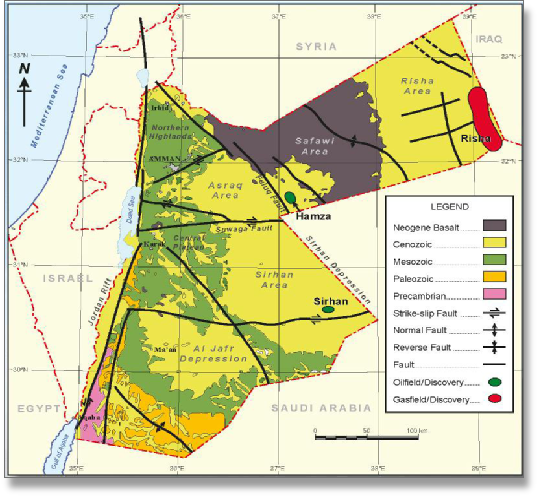