The first offshore exploration in Namibia took place during the late 1960s and early 1970’s. One well was drilled by Chevron in 1974 (Kudu 9A-1) which discovered the Kudu gas field.

No further exploration was carried out by foreign companies until after Namibia became independent in 1990. However, Swakor (now NAMCOR) drilled Kudu-2 and Kudu-3 in 1987 and 1988, with Kudu-3 then confirming the existence of a major gas field.

In 1991 the First Exploration Licensing Round was held. Five licenses were awarded to Norsk Hydro, Ranger, Sasol, Chevron and Shell. In 1995 a Second Licensing Round led to the award of 2 new licenses to Shell, one of which was an extension to the existing license that Shell had acquired over the Kudu field.

Over 28,000 kms of 2D seismic was collected in the licenses and 60,000 kms of multi-client data. No applications were received in the Third Licensing Round in 1998. From 1991 to 1998 nine exploratory wells were drilled on the offshore shelf.

A 4th Round in 2004 then led to the award of 2 blocks to BHP-Billiton, west and south of Kudu.

An open licensing system had been adopted in 1999 although exploration only picked up from 2008 with new 2D and 3D seismic surveys over the western deeper water margin.

Six exploration wells were drilled including drilled Kunene-1l in 2008 by Sintezneftgaz, Tapir South-1 and Kabeljou-1 in 2012 by Chariot, Wingat-1, Murombe-1 and Moosehead-1 in 2013 by HRT and  Welwitschia-1 in 2014 by Repsol. These confirmed the presence of lower Cretaceous source rocks and clastic and carbonate reservoirs but failed to locate commercial accumulations of oil or gas.

The Kudu Field - In development

The onshore Kavango Basin has been cited as potentially containing the last major onshore oil discovery on Earth. 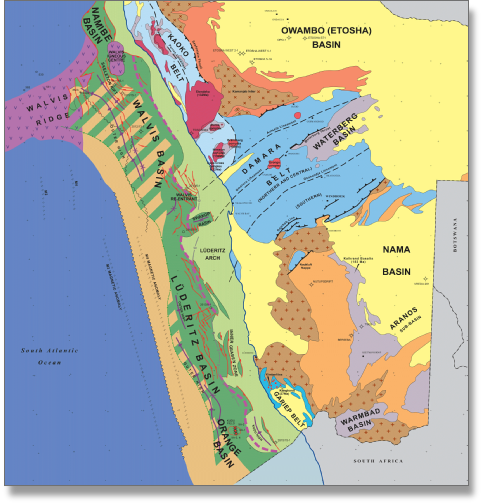