Qatar is entirely underlain by the Arabian Basin on the northeastern part of the Arabian Plate, onshore and offshore in the Persian Gulf. This foreland basin is wedge-shaped, dipping beneath the Zagros thrust front in eastern Iran.

Rich in hydrocarbons, the Qatar peninsula lies on a regional high in the basin. The structural high contains Qatar’s giant North Gas field. Half this field extends into the Iranian part of the Persian Gulf where it is called the South Pars field.

The Arabian Basin (or Persian Gulf Basin) - lies on the northeast of the Arabian Plate between the Eurasian and African Plates. It covers much of the onshore Middle East and the offshore Persian Gulf, Gulf of Oman and Arabian Sea, all of which are marginal seas of the Indian Ocean.

The Arabian Plate has divergent margins along the Gulf of Aden, Red Sea and Sheba ridge. On its east the Owen ridge is an intra-oceanic transform fault. There are convergent margins on the north and northeast in Turkey, along the Zagros Mountains on the east of Iran, and along the Makran fold belt in Pakistan, where the plate is subducting beneath the Eurasian plate. The Dead Sea and associated ridges were created by a transform fault on its northwest margin.

The Plate comprises a number of structural regions including the Zagros fold and thrust belt, the Arabian Trough in the central region of Saudi Arabia and Bahrain, the Gotnia Trough in the northern region covering Iraq and Syria and the Rub-Al-Khali in the southern region in Saudi Arabia and parts of the United Arab Emirates. These were largely established during Palaeozoic continuous continental marine sedimentation on the north east side of Gondwana.

Recognisable structural development of the region began around 800 mm years ago in the Precambrian when a series of islands-arcs and micro-continent terranes were accreted by compression to form the Arabian Plate within Gondwana. This culminated in the Hormuz salt basin around 650 mm years ago.

During the Late Ordovician polar glaciation in Gondwana followed by a rise in sea level in the Early Silurian led to deposition of organic-rich shales, a major source of Palaeozoic hydrocarbons.

The Hercynian Orogeny began in the Late Devonian and the region was in a compressional back-arc-setting. The central Arabian plate was uplifted, tilted eastwards and eroded.

In the late Permian and early Triassic the break-up of Gondwana began with thermal subsidence and extension in the Arabian plate followed by rifting of the Zagros region that opened the Neo-Tethys Sea. This rifting continued until compression during the early Alpine orogeny in the Late Cretaceous which resulted in uplift and erosion and closure of Neo-Tethys Sea.

The Late Alpine Orogeny began in the early Tertiary as the Arabian and Eurasian plates collided to form the Zagros Fold Belt and Mesopotamian Foredeep which was the start of the formation of the foreland Arabian Basin. Meanwhile the Red Sea and Gulf of Aden began to open around 25 mm years ago, separating the African and the Arabian plates.

The Arabian basin accumulated a thick sequence of carbonate reservoirs through the Palaeozoic and Mesozoic during long periods of stable subsidence.

Most of the oil in the region originates from Jurassic organic-rich carbonates although source rocks are also present in Paleozoic and Cretaceous sediments. 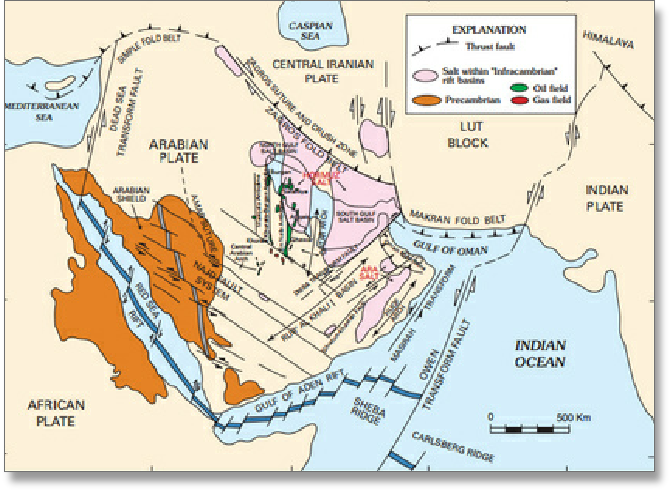