Sri Lanka lies on the Indian tectonic plate, formerly part of the Indo-Australian Plate and of Gondwanaland. In the early Mesozoic the Indian plate including Sri Lanka separated from the African, Antarctic and Australian plates and moved rapidly northeastwards.

In the Eocene the Indian plate collided with the Asian landmass creating the Himalayan mountain range in northern India. It continues to move northwards with Sri Lanka is far from the collision zone.

Onshore the country is a stable block of the Indian plate underlain almost entirely by Precambrian basement metamorphic rocks. Some limited outcrops of Jurassic sediments are present near the western coast whilst Miocene limestones underlie the northwestern shelf and a narrow belt along the onshore west coast.

Cauvery Basin - This coastline is part of the Cauvery Basin of southeast India which has been accumulating sediments from the highlands of India and Sri Lanka since the breakup of Gondwanaland.

The Mannar Basin - extends along the southern coast of India and northwest coast of Sri Lanka within the Gulf of Mannar. The basin is an intra-cratonic rift resulting from fragmentation of Gondwanaland during drifting of the Indian sub-continent away from the Antarctic plate that began in the Late Jurassic. It contains up to 6,000m of shale, sandstones and minor limestones ranging in age from Late Jurassic to Recent.

Cretaceous deep water fans provide potential reservoirs with analogues seen in east India and along the coast of East Africa. A number of sub-parallel horsts and grabens trend northeast-southwest and may form traps.

Source rocks are gas-prone. Deep water gas discoveries in the Mannar basin prove the presence of gas fields. However, Globalshift believes that none have yet proved commercially viable.

Petroleum exploration in Sri Lanka began in 1967 when CGG acquired 420 kms of onshore and 75 kms of offshore seismic data on behalf of the Ceylon Petroleum Corporation (CPC).

A Soviet company then acquired 4,837 kms of marine seismic data from 1972 to 1975 as well as some onshore data to evaluate the Palk Bay area in the Cauvery Basin. In 1974 the company drilled Pesalai-1 on Mannar Island, encountering gas shows in an Early Cretaceous sandstone. Two more wells were drilled nearby without success and there has been no further activity onshore.

In 1976 Western Geophysical acquired 1,947 kms of seismic data around the island and 2,829 kms in the Palk Strait and Gulf of Mannar. Marathon then drilled two exploration wells, Palk Bay-1 and Delft-1, in the Cauvery Basin targeting horst blocks but failed to encounter any hydrocarbons.

In 1981 Cities Services acquired interests in the Cauvery and Mannar basins. They collected 1,289 kms of seismic in the Gulf of Mannar and 267 kms in Palk Bay and drilled the unsuccessful Pearl-1 well on the northeast shelf of the Gulf. It penetrated a thick Late Cretaceous sandstone unit.

After ONGC discovered oil in the Indian part of the Cauvery basin, Cities Services went on to drill well Pedro-1 to search for a similar structure but failed to encounter any hydrocarbons.

Seismic data were then collected in the Mannar Basin in 1984 but no drilling was carried out and it was not until 2001 that CPC and TGS NOPEC signed a new agreement to collect 1,100 kms of seismic data followed by an additional 4,600 kms in 2005.

A second licensing round was launched in 2013 but this attracted only 2 bidders, neither of which acquired a license. Cairn then pulled out in 2014, unable to develop its discoveries commercially.

Total acquired a licence in 2019 to explore deep waters off the untouched east coast but at the end of 2019 no wells had been drilled offshore Sri Lanka since 2013.

No oil or gas production is forecast by Globalshift for the short or medium term. 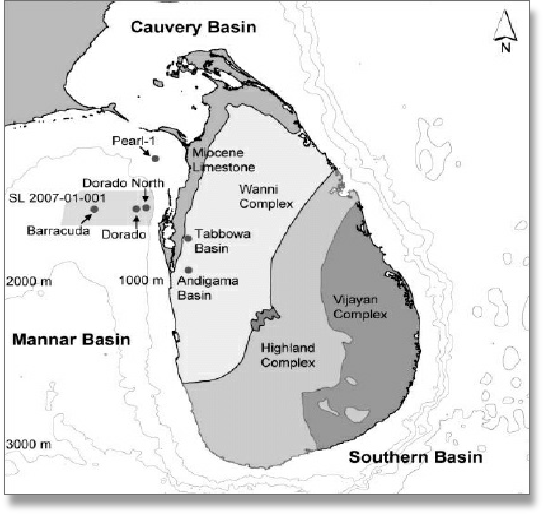