Ukraine has three productive regions: the Dnieper-Donets rift in the northeast, the Carpathian folded belt and its foreland in the west, and the offshore Black Sea shelf and associated deep waters in the south. The rest of the country is underlain by the Pre-Cambrian Ukrainian Shield.

The Dnieper-Donets Basin - has yielded most of Ukraine’s oil and gas. It is a long and narrow Late Devonian rift located in the northeast of the country with a small part in the southeast in Russia.

Sediments are very thick, with a column up to 15 kms in the centre. Precambrian basement of the Ukrainian shield borders the basin on the southwest while to the northeast is the Voronezh regional basement high which is covered by a thin layer of Palaeozoic sediments.

In the southeast it merges with the Donbas folded belt which is a structurally inverted and deformed extension of the rift system. In the northwest it extends into the Pripyat Devonian rift basin of Belarus.

The basin has four sequences. The pre-rift platform includes Middle Devonian clastics, deposited in an intracratonic basin. The Upper Devonian syn-rift sequence is up to 5 kms thick comprising marine carbonate, clastic, and volcanic rocks and two deformed salt formations of Frasnian and Famennian age. The post-rift sag sequence comprises Carboniferous and Lower Permian clastic marine and alluvial deltaic rocks up to 11 kms thick in the southeast.

The Lower Permian includes a salt that acts as a regional seal. In Early Permian time the southeastern basin areas were uplifted and eroded and the Donbas foldbelt was formed. Finally a post-rift platform comprises Triassic through Tertiary rocks deposited in a shallow platform depression which extends beyond the basin boundaries.

Most oil and gas is reservoired in Lower Permian rocks below the salt with the remainder in the Lower Carboniferous. Traps are primarily salt-cored anticlines or drapes over Devonian horst blocks. These are sourced by Devonian syn-rift and Carboniferous post-rift shales. Although these beds had matured by the end of the Palaeozoic, inversion probably led to remigration of hydrocarbons. Basin models are thus very complex. Since most of the traps are salt-related new modern seismic acquisition and processing techniques could perhaps reveal further small oil and gas accumulations.

The Carpathian Basin - including the Carpathian folded belt and its foreland basin is in the west of the country, spreading into to Poland, Slovakia, Hungary and Romania. It is a complex plate boundary with most oil and gas production coming from the folded belt within thrust and imbricate units. Many of the old fields were discovered by surface geological study without seismic data. A few fields also lie within the platform sequence on the foreland.

Additional small fields are likely to be found in both areas but the small complex structures require detailed and modern seismic acquisition and interpretation to image the deep traps and reservoirs.

The Black Sea Basin - in Ukraine has two parts; the Gulf of Odessa and the Sea of Azov. However, the productive part of Sea of Azov is now part of Russia (disputed) as is most of the offshore folded belt (called the Sudak folded belt) south of Crimea and the Kerch peninsula.

Exploration in the Gulf of Odessa has targeted inverted structural traps formed by compressional tectonic events during the Late Eocene and Middle Miocene. The main productive horizons are in Upper Cretaceous, Paleocene, Eocene, Oligocene and Lower Miocene sequences. Oligocene to Lower Miocene Maykop shales and Aptian-Albian mudstones are thought to be the source rocks in the region. There are many undrilled structures on the shelf as well as potential stratigraphic traps within Paleocene and Eocene units. In addition deeper Mesozoic sediments are barely explored.

The shelf extends into deep waters bounding the Sorokin foredeep basin from the north. Prominent syn-rift structures such as the Tetyaev High provide the potential for structural traps.

Other Areas - may have significant unconventional resource potential. The Dnieper-Donets basin contains deep tight gas reservoirs of Carboniferous age which are yet to be exploited. Elsewhere the country has a Silurian to Lower Devonian shale succession similar to Poland. The main reservoirs are thought to be located near the Polish border in the foreland of the Carpathians and between Moldova and the Black Sea coast.

The presence of oil has been occasionally reported in Ukraine since the 14th century. In the 1820s production began in the Boryslav region within the Carpathians. This had become the largest oil producing region in Europe by the early 20th Century. Boryslav was part of Poland up to 1772, Austria to 1918 and Poland again from 1919. It was annexed by Germany and then the Soviet Union (Ukraine SSR) after 1940. In 1945 deliveries of gas started into Poland; the first gas exports in the world.

As far back as 1853 oil produced in Boryslav was distilled and used in the world’s first kerosene lamp to illuminate the public hospital in Lvov. The invention of the kerosene lamp marked the beginning of concerted exploration for oil in the eastern Carpathians and, in 1861, one of the first oil rigs in the world was built there. By 1909 the region, all of which was under Polish jurisdiction, was producing around 40,000 bbls per day of oil (5% of the world’s production) and over 12,000 rigs were operating.

Gas production began in 1940 and by 1945, with Boryslavnow part of the Soviet Union, deliveries of gas had started from the Dashavske and Oparske gas fields to Poland and subsequently to Russia, Belarus, Lithuania, Latvia, Czechoslovakia and Austria.

The industry then grew rapidly rapidly after the discovery of oil and gas in the Dnieper-Donets basin and the beginning of production from this area in 1963. Total oil output from both regions reached a peak of around 275,000 bbls per day in 1971. Gas production, which has seen relatively more substantial growth, peaked in 1975 at around 64 bcm for the year.

Later exploration in Crimea and in very shallow water wells on the adjoining Black Sea shelf led to modest amounts of oil and gas production from small on and offshore accumulations. More substantial gas production from this region began in 1981 from the offshore Golitsina field.

Production peaked in the 1970s with little hope of recovery at the time. The Soviet Union unravelled, investment levels dropped, and both oil and gas production entered a steep decline. The Carpathians play was almost exhausted and the Dnieper-Donets rift had been intensely drilled. New finds needed increased investment in modern seismic which was largely not available in the Soviet bloc.

This oil production decline flattened off in the 1980s but gas production, which had much further to fall, continued to decline through to the early 1990s, in part driven by dwindling gas demand as Ukrainian industrial output plummeted.

New investment after independence in 1991 failed to increase production to any extent. New prospects were limited, especially those containing oil, whilst redevelopment, including use of EOR projects on old producing fields, had mixed success. Meanwhile in the Gulf of Odessa around 90 wells have been drilled since 1970 and 8 gas/condensate field discoveries were reported but there was very little additional production from Ukrainian waters or from onshore Crimea.

The short and medium term future of oil and gas production in Ukraine is forecast by Globalshift to be one of stagnation. Notwithstanding the political turmoil in the east of the country, where the most prospective acreage lies and which had seen curtailed investment even before the oil price decline of 2015, few significant new prospects remain outside redevelopment of old fields.

In particular the Carpathian basin in Ukraine, which is relatively stable politically, is almost exhausted of oil and gas resources and requires expensive wells to drill deeper more complex layers below the thrust belt.

However, Ukraine has some potential for oil and gas from shales in the west of the country near the border with Poland. The shales probably do not contain sufficient exploitable volumes to turn around the industry, even when prices recover, but they may lead to some modest growth in drilling and production in the mid 2020s along with some new output of gas extracted from coal beds. 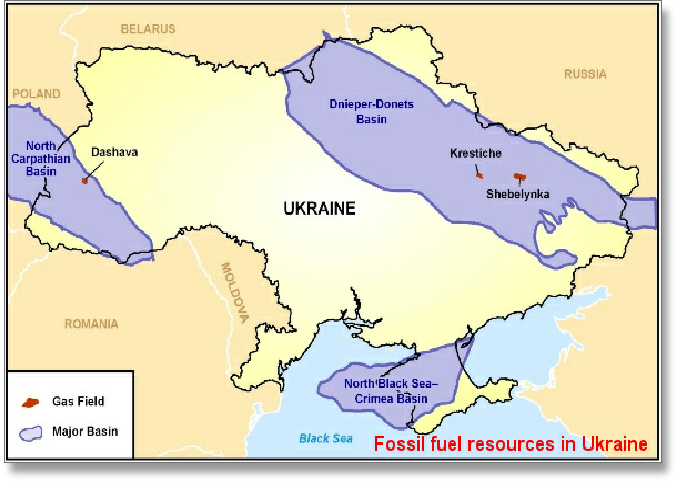