Brunei (the Nation of Brunei, the Abode of Peace) consists of 2 parts. on the island of Borneo.The South China Sea abuts its northeastern coast and otherwise it is completely surrounded by Sarawak, Malaysia.

Inhabited for thousands of years, the first record of Borneo (Po-ni) is in a letter to the Chinese emperor in 977 AD referring to its wealth. By 1365 it was part of the Javan Majapahit Empire after which Islam arrived and a Sultan rose to power in control of north Borneo and parts of the Philippines.

Visited by Spain in 1521, which fought and lost a war in 1578, the Brunei empire gradually declined until the UK invaded in 1846. In the 1880’s Sarawak was ceded to the White Rajah and Sabah fell to commercial interests. Brunei then became a British protectorate in 1888, acquiring its current size in 1890 and a colonial manager in 1906.

Oil was discovered in 1929 transforming the region’s importance and leading to occupation by Japan during World War II. A new government was formed after the war and in 1959 a constitution was written declaring Brunei a self-governing state.

An armed rebellion against the monarchy in 1962 was ended with the help of the British and independence was granted in 1984. Now mostly dependent on oil and gas (LNG), economic growth has turned Brunei into a rich industrialised country.

Brunei is a small country consisting of two unconnected parts on the island of Borneo. Most of the population live in the western part in coastal towns on the edge of lowland rain forests below 300m. Mountainous areas of rain forest occur further inland including in the eastern part of the country. The highest point is Bukit Pagon at 1,850m.

Onshore oil production began in Brunei in 1924 but the discovery of the onshore part of the Seria field in 1929 was the first significant event and oil production then increased considerably in the 1930s.

The first  offshore exploration well was drilled in 1956 and it is now offshore where the bulk of Brunei’s oil and gas is now produced, primarily from Baram delta sediments.

The first field to come onstream offshore was actually an extension of the Seria field in 1955 but it was the Ampa field and its neighbours, onstream from 1965, that revolutionised Brunei’s economy. Oil production is now declining but there remains potential for deep water output on trend with fields in Sabah in Malaysia.

Offshore gas production, mostly associated with oil, began in 1968 and had established a plateau in 1972 when Brunei started to export LNG to Japan. Production started to increase again in 1995 as the LNG plant was expanded.

Offshore gas output is expected by Globalshift to continue to rise once deep waters are developed. 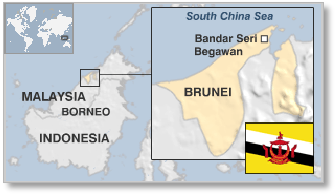 Brunei's system is governed by the tradition of Malay Islamic Monarchy covering culture, Islam, and the political framework. Brunei has a parliament but there are no elections.

The Sultan is head of state with full executive authority and serving as the Prime Minister, Finance Minister and Defence Minister.

The Energy and Industry Department in the Ministry of Industry and Primary Resources (MIPR) is responsible oil and gas in Brunei.

Brunei National Petroleum Company, also known as PETROLEUMBrunei, is the NOC established in 2002 tasked with realising and enhancing the value of hydrocarbons within designated petroleum blocks.

Brunei is a member of the Association of Southeast Asian Nations (ASEAN) which it joined in 1984.