Indonesia (the Republic of Indonesia) lies between the Indian and Pacific Oceans and has over 13,000 islands, straddling 2 continents. It has land borders with Papua New Guinea, Timor Leste and Malaysia.

Melanesians, who inhabited the islands for 45,000 years, were replaced by Austronesian migrants after 2000 BC. From these trading kingdoms had developed by 100 AD. After 650 the Buddhist Srivijayans ruled on Sumatra whilst in Java the Hindu Majapahit kingdom was founded in 1293. This Javan Empire dominated the region for 200 years.

Muslims traders also arrived and the main islands gradually adopted Islam. Europeans first appeared in the 16th century and sought spices from Maluku. In 1602 the Dutch East India Company was established which took control of the larger islands until its dissolution in 1800 when the Dutch East Indies became a colony of the Netherlands.

Occupation by Japan in World War 2 ended Dutch rule and independence was finally achieved in 1949. West New Guinea was included in Indonesia in 1962, while in 1999 Timor Leste voted to secede from it.

A military coup in 1965 led to a violent purge of Chinese and communists but the change in government at that time triggered rapid economic growth. The country has now achieved relative stability but is still challenged by natural disasters, corruption and separatism.

Indonesia is the largest archipelagic country in the world. It has 13,466 islands on both sides of the equator of which 6,000 are inhabited. The largest are Java, Sumatra, Borneo (shared with Brunei and Malaysia), New Guinea (shared with Papua New Guinea), and Sulawesi.

The country is located on the edge of the Pacific, Eurasian, and Australian plates and has numerous fault zones and sites of subduction between and within the island groups. It is thus the site of many volcanoes (at least 150 of which are active) and frequent earthquakes.

At 4,884 metres, Puncak Jaya in the Sudirman Range of the central highlands of Papua Province is the highest mountain. It was created in the late Miocene by oblique collision between the Australian and Pacific plates.

Indonesia began producing oil from the back-arc basins of South Sumatra in 1892. Output was soon achieved from North and Central Sumatra, Java, Kalimantan, the island of Seram and West Papua. The largest fields are Duri and Minas in Central Sumatra but hundreds have gone onstream.

Gas production is widespread, dominated by LNG from North Sumatra, Kalimantan and West Papua. However, the country has been struggling to maintain gas exports whilst meeting indigenous demand. Globalshift forecasts a return to growth in the 2020s. 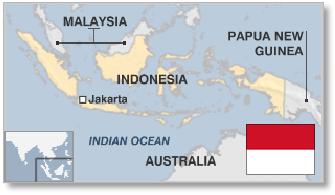 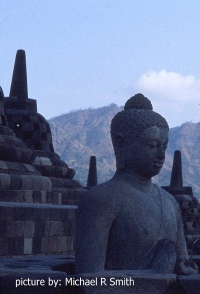 Indonesia is a presidential republic. The elected president is head of state, appointing a council of ministers and serving a maximum of 2 consecutive 5-year terms.

The oil and gas industry is overseen by the Ministry of Energy and Mineral Resources. The Special Task Force for Upstream Oil and Gas Business Activities (SKK Migas) was established in 2013 to manage activities for the Ministry.

Indonesia was a member of OPEC from 1962 to 2008. It rejoined in 2015 but suspended its membership in 2016 after failing to agree on production cuts. Indonesia is also a founding member of the Association of Southeast Asian Nations (ASEAN).