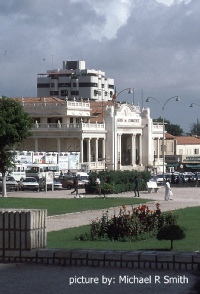 Senegal (the Republic of Senegal) is east of the Atlantic Ocean and borders Mali (east), Guinea and Guinea-Bissau (south), and Mauritania (north). The Gambia partly separates the southern Casamance region which is also part of Senegal.

Senegal has been inhabited for thousands of years by a range of ethnic groups. Kingdoms are recorded from the 7th century after which the area came under the influence of eastern empires (including the Ghana Empire) until the 14th century when the Jolof Empire of Senegal was founded, uniting many local kingdoms. The empire collapsed in 1549 and since that time around a third of the population has been enslaved.

In the mid-15th century European traders arrived and by 1677 France had taken control of the small slaving island of Gorée, off Dakar. The French expanded onto the mainland in the 1850s after slavery was abolished and proceeded to conquer all of the local kingdoms. France then administered the entirety of French West Africa from Dakar.

In 1960 Senegal achieved independence after a brief merger with French Sudan (Mali) to form the Mali Federation. Senegal joined with the Gambia to form the Senegambia Confederation in 1982, but this was dissolved in 1989.

Although generally politically stable the region of Casamance south of the Gambia has sought separation. Senegal's economy is diverse, with agriculture and tourism being major sectors.

Senegal largely comprises rolling sandy plains of the western Sahel which rise to foothills in the southeast where the highest point in the country is at 584m. The northern border is the Senegal River. Dakar lies on the Cap-Vert peninsula, the westernmost point of continental Africa.

Minor oil production began from the Diam Niado field in onshore Senegal’s Coastal Basin in 1960. This was abandoned in 2000. Small amounts of oil may be developed here in the future.

A large heavy oil field was identified offshore in 1967, overlapping into Guinea-Bissau. Although not currently commercial, some production may be realised in the 2020s.

Deeper waters offer potential. Drilling in 2014 and subsequently has identified substantial resources. Oil production is forecast for the 2020s.

Small volumes of gas were delivered from the Diam Niado onshore field whilst one further small accumulation began producing gas in 2002 for local use. Small amounts of additional onshore gas may eventually be developed.

Offshore gas production is not currently forecast by Globalshift although prospects exist in deep waters near the Mauritania border where a number of deep water gas discoveries have been made. 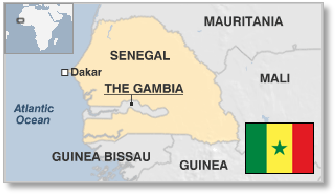 Senegal is a semi-presidential democratic republic with a president elected every 5 years.

The unicameral parliament consists of a 150-member National Assembly elected for a 5-year term.

A Senate was in place from 1999 to 2001 and 2007 to 2012. Senegal is one of the few African states that has never experienced a coup or harsh authoritarianism.

The oil industry in Senegal is overseen by the Ministry of Energy, Mines and Industries though the NOC (called Petrosen). Petrosen was created in 1981 to implement petroleum policy.