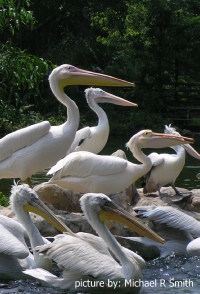 Tanzania (the United Republic of Tanzania) is bordered by Kenya and Uganda (north), Rwanda, Burundi, and Congo-Kinshasa (west), Zambia, Malawi, and Mozambique (south), and the Indian Ocean.

Hadza and Sandawe hunter-gatherers lived in the region for thousands of years, replaced by migrants settling from the north and west from around 3,000 years ago. They produced iron and steel and eventually began trading with merchants from the Persian Gulf and India.

After landing in 1498 the Portuguese took control of the coast until the island of Zanzibar was overrun by Arabs from Oman in 1699. This became the centre for the Arab slave trade. In 1885 Germany conquered the region, incorporating Tanzania (but not Zanzibar) into German East Africa.

Zanzibar became a British Protectorate in 1890, run by Arab Sultans. After defeat of Germany in World War I, the mainland became a British Mandate called Tanganyika. It was important during World War 2 as a source of food and soldiers.

In 1954 the Tanganyika African National Union (TANU) began to campaign for independence from the UK which was achieved in 1961. Zanzibar followed in 1963 and they merged to form Tanzania in 1964. The government has been relatively stable since then but poverty persists despite recent economic growth.

Tanzania is mountainous and densely forested in the northeast where Mount Kilimanjaro, at 5,895 metres, is Africa's highest mountain. Central Tanzania is a plateau, with plains and arable land whilst the eastern shore is hot and humid.

Tanzania includes several offshore islands, including Unguja (Zanzibar), Pemba, and Mafia. Three of the Great Lakes are partly within Tanzania. To the north is Lake Victoria, Africa's largest lake, and to the west is Lake Tanganyika, the deepest. The floor of Lake Tanganyika, at 352 metres below sea level is Africa’s lowest point. To the southwest is Lake Nyasa.

Gas production began in 2004  from the Songo Songo field. This field lies partly on and partly offshore. The offshore Mnazi Bay gas field came onstream in 2007. This area of the Rovuma Basin is a regional high and there are just a few further prospects.

Further offshore where the basin borders Mozambique several deep water discoveries have been made. Deep water gas production is planned from 2 blocks into a new LNG plant.

Meanwhile there are also plans for a gas pipeline from Mnazi Bay to Dar es Salaam. Existing gas has already led to a big increase in electricity generation and further growth is predicted by Globalshift.

Tanzania began producing minor natural gas liquids with its gas in 2004 but has not achieved any oil production. 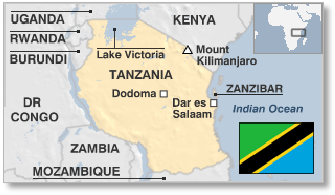 Tanzania is a unitary presidential democratic republic. The President is head of state and government, and of a multi-party system. The President and vice-president are elected for 5-year terms. The president appoints a prime minister subject to confirmation by the National Assembly, to serve as the government's leader and selects a cabinet from assembly members.

Legislative power is vested in the 357-member National Assembly which is unicameral and elected for a 5-year term.

The oil and gas industry is overseen by the Ministry of Energy and Minerals. The Tanzania Petroleum Development Corporation (TPDC) is the NOC through which the Ministry implements its petroleum exploration and development policies.