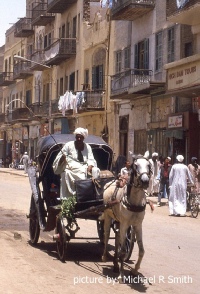 People lived in the Nile valley over 10,000 years ago. Rule by Egypt was replaced by the Nubian Kingdom of Kush in 1700 BC, persisting until 400 AD when Sudan became an outpost of the Byzantine empire. During the 16th century the Funj people, migrating from the south, dominated until 1821 when Egypt, under the Ottomans, invaded.

In 1885 the Islamist Mahdi (Ansar) people wrested control, expanding into neighbouring countries until defeated in the 1890s. They were finally subdued by the UK in the 1898 Battle of Omdurman. The north and south were run separately, prevented from uniting with Egypt.

In 1956 UK and Egypt agreed to an independent united Sudan. However the new government was unstable with repeated coups and a civil war between the north and south. Persecution of non-Arabs occurred, especially during the War in Darfur in the east.

In 2006 a peace agreement was signed but sporadic fighting continues along the South Sudan border which gained independence in 2011. After losing most of its oil, the country’s economy is growing with investment from China.

North Sudan comprises flat plains, broken by a few mountain ranges. In the west the Deriba Caldera at 3,042m in the Marrah Mountains, is the highest point. In the east are the Red Sea Hills.

The Blue and White Nile rivers meet in Khartoum to form the Nile, which flows northwards through Egypt to the Mediterranean. There are several dams on the rivers and rich mineral resources are present in the mountains.

The original Sudan began producing oil in 1993 from a number of fields in the central Muglad Basin which is part of the East African rift. New discoveries and developments led to increasing output from this region.

After separating from South Sudan in 2011 (after a protracted civil war) the former country of Sudan, which was run from the north, lost over three-quarters of the oil. There remains a dispute over the region of Abyei. Globalshift predicts that further unexplored potential remains in the Muglad and Melut Basins in north Sudan, the latter already productive in South Sudan.

Oil from the fields is exported via pipeline to Port Sudan on the Red Sea, a pipeline which also transports southern oil. The terms under which this oil is moved are in dispute.

North Sudan produces no marketed gas and appears to have no offshore potential in the Red Sea. 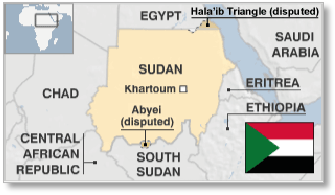 Sudan is an authoritarian state although nominally a federal presidential democratic republic. The President is head of state and of government and is commander of the army.

Legislative power is vested in both the government and the bicameral parliament. The National Legislature has 450-seat National Assembly (lower chamber) and a 50-seat Council of State (upper chamber) all indirectly elected for 6-year terms.

The oil and gas industry is administered and managed by the Ministry of Petroleum. The state-owned Sudapet (Sudanese Petroleum Corporation) manages the oil sector with interests in blocks and provision of oil field services through subsidiary companies.