Global warming, mostly driven by increased carbon dioxide in the atmosphere, leads to fundamental changes in the Earth’s climate.

These changes can, in time, have a catastrophic effect on human society.

Forecasts of oil and gas supply, and indeed of all energy sources, need to include consideration of how potential legal and social curbs on the use of carbon fuels will impact the global Exploration and Production industry.

Growing populations and increasing affluence over the last half century have both led to an unprecedented growth in the use of fossil fuels. This, in turn, has caused higher carbon dioxide emissions into the atmosphere, raising atmospheric temperatures higher. Higher temperatures lead to, in particular, extreme weather events, melting polar ice caps, and fluctuations in oceanic currents.

Climate Change - is driven by rising global temperatures which, in turn is driven by rising greenhouse gases in the atmosphere. In 2019 the Earth's average temperature was around 15 degrees (all temperatures are given here in Celsius) with human emissions of carbon dioxide of 35 bn tonnes. The temperature had risen from 13.5 degrees in the 1950s with human emissions of carbon dioxide at around 5 bn tonnes. This process is usually known as global warming.

Nevertheless temperatures have been much higher (and lower) during past geological periods; during the Mesozoic, for example. When the dry, continental conditions of the Triassic were replaced by the warm, humid climate of the Jurassic dense tropical forests covered much of the landscape at higher latitudes.

These forests were surrounded by warm organic-rich lakes and seas leading to vast quantities of the earth’s oil source rocks being deposited. Temperatures were then averaging around 21 degrees.

However, natural (not related to human activity) temperature rises in the Jurassic, or at any other time, are irrelevant to present-day climate change.

Firstly, these natural fluctuations were usually much slower than they are today. Living things had time to migrate, adapt and/or evolve as conditions changed.

Secondly, human society has today overwhelmed  nearly every ecosystem on earth, erecting physical and social barriers to movement. Billions of people not only do not want to adapt, but also they have nowhere to go. This particularly applies to those inhabiting urban environments. 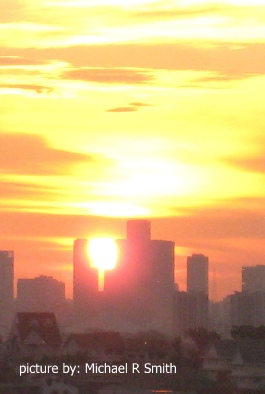 Since the industrial revolution began in about 1750, carbon dioxide levels in the atmosphere have risen by over 30%. Concentrations are higher than at any time in at least 800,000 years. Carbon dioxide is almost certainly responsible for most of the atmospheric rise in temperature over the last 50 years.

There is now a political effort to stabilise greenhouse gas emissions although with much dissent and disagreement. China emits more carbon dioxide than any other country followed by the USA and European Union member states (including the UK).

Of course China not only has a large population making emissions per person much lower but also much of China’s manufacturing output (and attendant emissions) are destined for use in, and thus ultimately attributable to, the USA and Europe.

The Greenhouse Effect - is the process that traps the Sun's energy in the Earth's atmosphere. Without it the Earth would be much colder and most life would be unsupportable. Part of the solar energy that reaches the Earth radiates back into space from the Earth's surface. However, part is absorbed by so-called greenhouse gases and re-emitted in all directions within the lower atmosphere, effectively heating it up.

Greenhouse gases occur naturally but large volumes are now released as a result of burning fossil fuels, as well as a by-product of some agricultural and other industrial processes. Humans are thus adding to the natural greenhouse effect, trapping more solar energy and increasing the average atmospheric temperature.

Greenhouse Gases - are many and varied. The most effective greenhouse gas is water vapour but it stays in the atmosphere for just a few days.

Carbon dioxide is less effective at trapping heat and is absorbed by plants and by oceans. However, most of it remains in the atmosphere for hundreds of years. As greater volumes are produced they build up over time. Perhaps a little over 80% of global warming driven by human activity is attributable to carbon dioxide.

Carbon dioxide is released during the burning of fossil fuels (coal, oil and gas). Meanwhile trees that would absorb carbon in the worlds forests are being progressively cut down. These would have not only absorbed carbon but their destruction also releases stored carbon adding to global warming.

Methane is an especially effective greenhouse gas . An equivalent volume of methane over a hundred year period can warm the earth 25 times more than carbon dioxide although it has a much shorter life in the atmosphere. Methane is emitted during the production and transport of fossil fuels although this is on a downward trend. A growing source of methane emissions arises from livestock and by the decay of organic waste in landfill. Perhaps 10% of global warming driven by human activity is attributable to methane.

Other industrially produced gases, including nitrous oxides and flourinated gases, contribute a little under 10% to the overall global warming effect. 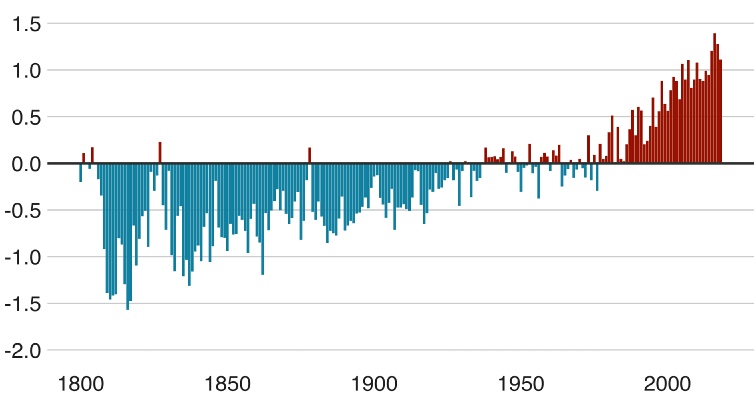 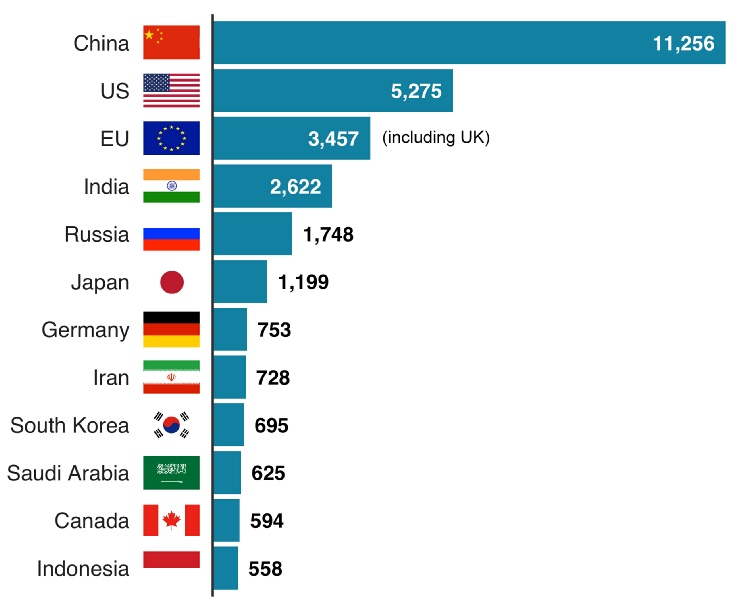 TOP EMITTERS OF CARBON DIOXIDE IN MEGATONNES PER YEAR

The Changing Earth - The world is now about 1 degree warmer than it was before widespread industrialisation began in earnest in the 1960s. Furthermore, the 20 warmest years on record have all occurred in the past 20 years while the years 2015, 2016, 2017 and 2019 make up the top four.

Global average sea level has increased by 3.6 mm per year in the last 15 years. Albeit uncertain, global sea level may have risen by 10-20 cm over the last 100 years.

Although water increases in volume as it heats up melting ice is believed to be the main cause of rising sea levels. Glaciers in temperate regions of the world are retreating and satellite records show an extensive and progressive decline in the size of the Greenland Ice Sheet. The maximum areas of winter and summer Arctic sea-ice have also substantially contracted over the last 40 years.

The effects of rising temperatures can be seen in the behaviour of vegetation and land animals. Earlier flowering and fruiting times for plants in temperate regions are accompanied by territorial adaptation and migration of animals to cooler latitudes.

There seems to be an increased occurrence of extreme weather events although it remains uncertain whether these are a by-product of global warming. They probably are.

Future temperatures - Should warming continue at the same rate, temperatures could rise by up to 5 degrees by the end of the 21st Century. Temperature rises of above 2 degrees were once regarded as the tipping point for drastic global disruption.

However, in the last few years there has been general acceptance that only by limiting temperature rises to 1.5 degrees can significant loss of habitat and life be prevented. An Intergovernmental Panel on Climate Change (IPCC) report in 2018 concluded that keeping to this target would require "rapid, far-reaching and unprecedented changes in all aspects of society".

But even if greenhouse gas emissions can be dramatically reduced, there will be a significant time lag. Large bodies of water and ice take hundreds of years to respond to small changes in temperature. Furthermore it takes tens of years for carbon dioxide to be leave the atmosphere.

Of course there is uncertainty about how the changing climate will impact lives. The problem really lies not in the actual global temperature but in the speed of change. Rapid rises in sea level under current constraints of high populations and barriers to movement make it impossible for humans to adapt without massive social and economic damage.

Human impact - As the world warms water evaporates, leading to more moisture in the air. Many areas will experience more rain and snow. Inland areas, during hot summers, will get less rainfall and droughts will become more common. As storms escalate and sea levels rise flooding will become more widespread.

Warming could cause freshwater shortages, change the ability of areas to produce particular foods, increase the disruption from floods, storms and heatwaves, and promote resource wars amongst people and nations. And poor densely populated countries, which are least equipped to deal with rapid change, will suffer the most.

Plant and animal extinctions will escalate as habitats change faster than species can adapt. And there will be increases in health issues, especially malaria and other water-borne diseases, and malnutrition in poor countries. As more carbon dioxide is present in the atmosphere, the concentration of gas in the oceans will increase. Water then becomes more acidic which will damage coral reefs.

Meanwhile feedback processes could create further heating such as through the release of trapped methane from high latitude permafrost that is melting. Should oceanic currents in, for example, the North Atlantic, be disrupted this would produce rapid and dramatic changes in climate over large populated areas.

This is tough to take for the people who have strived for their entire lives to explore for and exploit a product that will eventually harm millions of people. Similarly wealthy energy users who have enjoyed decades of transport growth and can visit cheaply and easily most parts of the world. But it is happening now.

The fossil fuel industry is a dying one. Unless carbon capture techniques can be perfected (an unlikely outcome) the oil and gas industry, along with the coal industry is destined to be almost gone in a hundred years regardless of how much of these resources remain to be found.

Clearly in forecasting oil and gas output the environmental damage that fossil fuels are causing need to be taken into account, at least qualitatively. Meanwhile there is another factor that is having the same effect - shortage of supply of lower cost oil. Until the advent of the new oil source from tight reservoirs this expectation of peak oil of conventional resources was proven by the data.

The challenge had been to find an alternative unconventional resource and that is what happened as oil and gas from shales in the USA grew dramatically. For this reason Globalshift assumes the following 3 factors in making forecasts of oil and gas supply and activity:

Conventional oil and gas resources will continue to be produced as fast as they can under commercial conditions both by private companies and by state companies such as Saudi Aramco. Growth will only be held back by lack of new areas to explore and exploit.

New oils and gases (including oil sands, oil and gas from tight reservoirs, and manufactured oils) will be restricted in output by both price and environmental constraints. Very little oil or gas trapped in tight reservoirs will ever be produced from Europe for example.

The world ‘s economy will continue to perform in a stable way albeit increasingly volatile, disrupted by trade wars and other side effects inevitable as populations grow and travel expands (the COVID-19 pandemic is an example of such volatility). 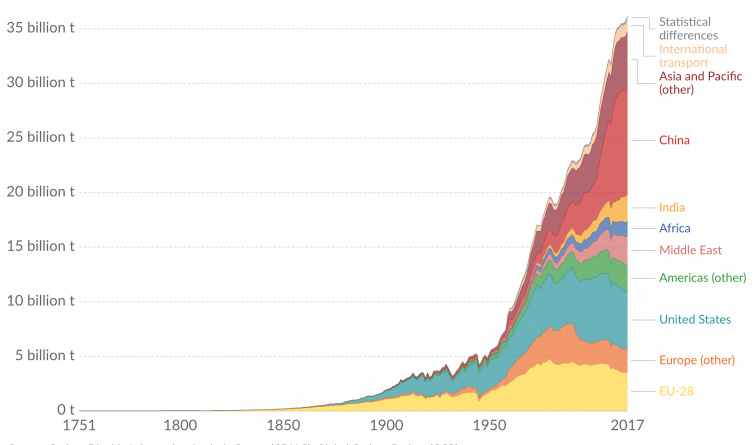 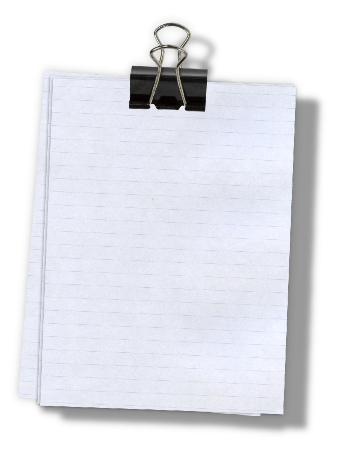