Nepal (the Federal Democratic Republic of Nepal) is a landlocked, dominantly Hindu, country in the Himalayas. It borders China to the north and India to the south, east and west.

Kusunda hunter-gatherers lived in the region 11,000 years ago. In 500 BC small kingdoms arose under the influence of Indian empires. The Licchavi Kingdom was established in central Nepal from 400 AD but conquered by dynasties from Tibet and India in 750.

New local rulers began to emerge in 1100 who consolidated into 3 kingdoms which were unified in 1768 into the Kingdom of Nepal by the Shah dynasty. Wars with China in 1778 and with the UK in India in 1815 (establishing the Gurkhas’ reputation as effective fighters) ended with Nepal ceding territory. A treaty with the UK made it a protectorate, superseded by a friendship treaty in 1923.

The pro-British Rana dynasty took over from the Shahs in 1846 until 1951 but it was not until 1990 that a parliament was fully established. In 1996 a Maoist Party tried to usurp the government and a civil war was fought until 2005. A negotiated ceasefire ultimately led to the abolition of the monarchy in 2008 and Nepal became a republic.

Nepal’s economy depends on agriculture and textiles and remittances from employment of the Gurkhas. Mountain tourism is also important.

Land-locked Nepal’s southern lowland plain (Terai) borders India and is part of the northern rim of the Indo-Gangetic Plain. Abutting the plain, the lower Himalayan range (Pahad) comprises mountains with populated valleys. The Mountain Region (Himal) north of this, contains 8 of the world's 10 tallest mountains, including Mount Everest.

The collision between the Indian plate and Eurasia started in the Paleogene and produced the Himalayas and Tibetan Plateau. Nepal lies within this collision zone in the central sector of the Himalayan arc. The Indian plate continues to move northwards subducting beneath Tibetan crust and pushing up the mountains.

The collision zone accommodates massive crustal shortening as the rock sequences slide over each other. Earthquakes can occur the last of which was in 2015. Erosion of the Himalayas is an important source of sediments in the Indian Ocean which are often gas-bearing.

Nepal has no identified indigenous oil or gas resources owing to its location within the Himalayas. Some sedimentary cover is present in the Terai and oil and gas seeps have been recognised in western Nepal.

One dry well was drilled in the southeastern lowlands in 1989, searching for Palaeogene reservoirs, but lack of exploration since then suggests to Globalshift that Nepal is unlikely to achieve any production in the future. 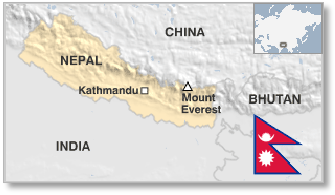 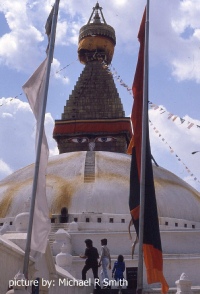 Up until 1990, Nepal was a monarchy controlled by a King. In 1990 a parliamentary monarchy with the king as head of state and a prime minister as the head of government was created.

This legislature was bicameral with a 205-member House of Representatives and a 60-member National Council.

In 2008 the King gave up power and Nepal became a republic with a president as head of state and an increased membership of the lower house.

The Department of Mines and Geology is the government organization responsible for oil and gas exploration.