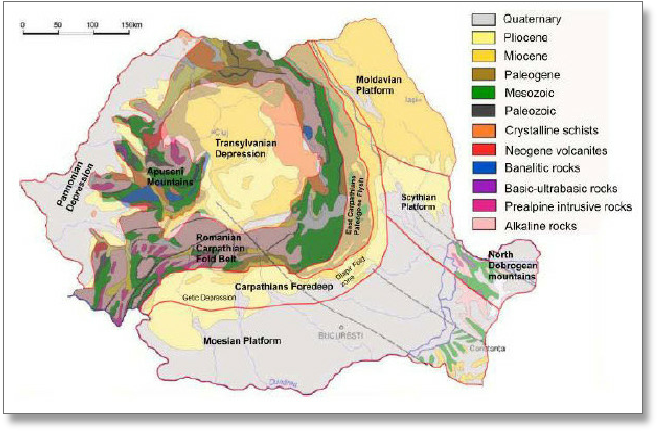 Major reservoirs in Romania are of upper Pliocene to lower Triassic age, located in the Moesic Platform, the Meridional or Eastern Carpathian Depression, the Pannonian Platform and the Continental Shelf of the Black Sea. Sandstone and limestone reservoirs are generally strongly folded and faulted, ranging from 100 to 4800 m in depth and a thickness of a few meters to tens of meters.

Oil was first used in the Roman province of Dacia (within Romanian territory) in around 200 AD. However, it was not until 1517 that oil occurrences were mentioned in Wallachia. In 1769 oil extraction was reported from Moldavia with the oil probably being collected from shallow hand-dug pits and ditches in outcropping rocks of the Carpathians.

Processing equipment was used in Lucacesti-Bacau from 1840 and a refinery was built by the Mehedinteanu brothers near Ploiesti in 1856, producing lamp oil for street lighting in Bucharest. The first commercial oil well was reportedly drilled in 1857 with production of around 2,000 bbls in that year, making Romania the first country with recorded oil production statistics (followed by the USA in 1859, Italy in 1860, Canada in 1862 and Russia in 1863).

The first deep, mechanical well was drilled in 1861 to a depth of 150m using wooden rods and auger bits. Production continued to grow through the 19th Century with the largest and most modern refinery in Europe built in 1896. In 1900 Romania was the third largest oil producer in the world with production at just over 5,000 bbls per day and the only country exporting gasoline.

In the early 20th Century a number of oil companies were created, supported by US and French capital and in 1907 The Romanian-American Company drilled the country’s first rotary well (Speranta-1). This was followed in 1908 by the first gas well at Sarmasel leading to the development of a BOP system and first gas production in 1913. A gas transmission pipeline from Sarmasel to Turda was built and in 1917 Turda became the first European town to be lit with natural gas.

World War I led to massive destruction of the oil fields of Ploiesti but after the war the industry continued to grow including production of oil in the Sarata Monteoru mine where 200 horizontal wells were drilled.

By 1927 1,566 oil wells were in production producing around 71,000 bbls per day. A gas compressor station had been installed at Sarmasel. Oil production reached a pre-World War 2 peak in 1936 and the country was fifth in the world in terms of exports.

After World War 2 the industry was nationalised and oil production slowly recovered reaching its absolute peak at just over 300,000 bbls per day in 1976 (including NGLs), from around 200 fields. Meanwhile gas production had also steadily increased to peak at around 38 bcm in 1983.

Romania is well explored with only limited remaining onshore potential after oil output peaked in 1976. Decline is expected to continue. Similarly gas production peaked in 1983 but shale gas potential exists onshore which may slow onshore decline in the future.

Offshore - After offshore exploration began in 1969 the first well in the Black Sea was Ovidiu East-1, drilled by a jackup in 84m of water in 1976. A discovery was made in 1980 and offshore oil production began in 1987 from the Lebada field. However, output from the Black Sea has never achieved more than 30,000 bbls per day.

Rapidly declining production through the late 1980s and 1990s and political reorganisation led to the establishment of the National Agency for Mineral Resources (NAMR) in 1995 and a new Petroleum Law. A National Oil Company (Petrom) was set up in 1997 but this was absorbed into the Austrian OMV Group in 2004.

The waters of the Black Sea have now 5 small oil fields in decline (Lebada Est, discovered in 1979, Lebada Vest, 1984, Sinoe, 1987, Pescarus, 1999, and Delta, 2007). Deep water gas discoveries are due to be developed and there may be some further unexplored oil and gas potential near the disputed border with Ukraine. New deep water gas fields should eventually reverse offshore output decline.