Singapore (the Republic of Singapore) is an island city state at the tip of Malaysia, with Indonesia's Riau Islands nearby to the south.

Singapore, then known as Temasek, was a trading outpost of the Sumatra Srivijaya empire from 700 AD, becoming a kingdom in 1299 and called Singapura (Lion City). It was destroyed by a Javan empire in 1401 and by the Portuguese in 1613 when it was part of the Johore Sultanate.

The area fell under Dutch control for most of the 18th Century but Singapore remained a backwater until 1819 when Sir Stamford Raffles acquired it from the Sultan of Johore for the East India Company as a trading post. It was ceded to the UK as part of the Straits Settlements in 1826 after which a big influx of Chinese immigrants arrived to work as labourers.

After World War 1 the British built a naval base but this failed to thwart Japan who invaded from the north in 1942. After World War 2 the Straits Settlements was dissolved and it became a UK Crown Colony. Chinese activists demanded home rule which was granted in 1959, followed by independence in 1963 within the Malaysia Federation.

In 1965 it left Malaysia to become a country in its own right and is now a wealthy centre of commerce, finance and transport with industries such as oil refining and rig building.

Singapore consists of 63 islands, including the main island called Pulau Ujong, connected to Malaysia via two causeways. Jurong Island, Pulau Tekong, Pulau Ubin and Sentosa are the largest of the smaller islands. The highest point is Bukit Timah Hill at 164m. Land reclamation projects have increased the country’s size by nearly a quarter since the 1960s, including merging a number of the islands.

The country, at the southern end of the Malay Peninsula, lies on the western part of Sundaland which is a granite-cored block of the Indo-Chinese plate. It is almost entirely composed of granites and gabbros with thin layers of young sandstone and mudstone sediments in the west and metamorphic quartzites in the northeast.

This geology is not suitable for the generation and accumulation of commercial volumes of oil and gas and Singapore has no indigenous oil or gas resources, either onshore or offshore. Globalshift believes it is very unlikely to achieve any production in the future. No exploration wells have ever been drilled in the country.

The country is a high consumer of oil, with large volumes used in refining and to fuel aircraft. It imports piped gas from both Malaysia and Indonesia. For added security of supply its first LNG regasification terminal opened in 2013 providing the capacity required for the country’s expanding energy infrastructure and to power new process plant developments. 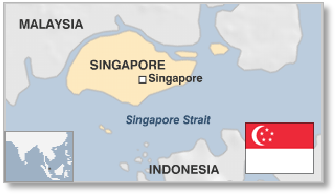 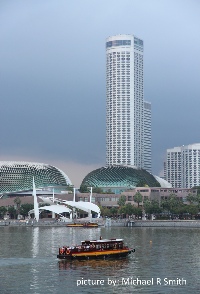 Singapore is a parliamentary republic. The elected President is a largely ceremonial post. Executive power rests with the Cabinet led by the Prime Minister.

Parliament is unicameral with 87 elected members and 9 nominated members. The People's Action Party has won every election since self-government in 1959.

There is no department of government specifically responsible for oil and gas resources.

The Energy Market Authority is a statutory board under the Ministry of Trade and Industry which promotes competition in the energy market and ensures a secure energy supply.

Singapore was a founding member of the Association of Southeast Asian Nations (ASEAN) in 1967.