Norway (the Kingdom of Norway) in Scandinavia borders Sweden to the east and Finland and Russia to the north-east. Its coast abuts the North Atlantic Ocean and Barents Sea.

Ancient humans in Norway evolved into Norsemen who formed small tribal states. In the 8th century these Vikings expanded all over Europe with those from Norway active in the British Isles and North America. Many of these small states formed confederations which united as a kingdom in 872 AD.

In 1319 the King of Norway was elected to the throne of Sweden and the countries were united. In 1379 Denmark was included in the union which became the Kalmar Union, dominated by Denmark. Sweden left in 1521 but Norway remained and its economy prospered although it lost land to Sweden in a series of wars.

Owing to Denmark’s support for Napoleon it was forced to cede Norway to Sweden in 1814. Although largely autonomous, Norway finally separated in 1905.

In World War 1 the country was neutral but its marine fleet supported the British. Still neutral in World War 2, it was invaded by the Nazis in 1940 and the government ruled in exile in Britain until after the war.

Since 1969, when oil was discovered, the country has become very rich with a market economy and an extensive welfare system.

Norway covers the western part of Scandinavia and includes the Arctic islands of Svalbard and Jan Mayen. It has a rugged coastline of fjords and islands, 83,000 kms in length.

To the north, west and south, Norway is bordered by the Barents Sea, the Norwegian Sea and the North Sea with the Skagerrak Strait lying between Norway and Denmark. The Scandinavian Mountains form the border with Sweden and most of the country is dominated by mountainous terrain with a glaciated topography. Deep fjords cut into the land which were flooded by the sea following the end of the Ice Age.

Permafrost is present all year in the higher mountains which comprise granites and metamorphic rocks whilst marine sandstones and limestone are present at lower elevations.

Oil production in Norway, which all comes from offshore in the North, Norwegian and Barents Seas, began in 1971 and reached a peak in 2001. Although additional fields await development and there are numerous prospects in shallow and deeper waters, these will be unable to permanently reverse long term decline.

Gas production continues to rise as new fields are developed, in particular the Troll and deep water Ormen Lange fields. New developments in the Barents Sea, including Europe’s first LNG plant, are also stemming decline. Globalshift expects that exports of gas to Western Europe will continue to grow rapidly. 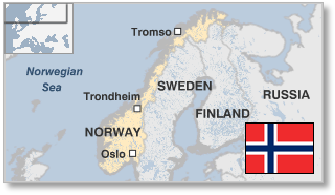 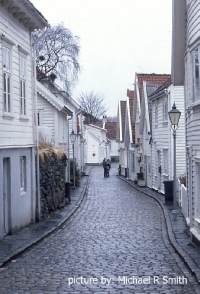 Back street in old town

Norway is a unitary constitutional monarchy with a parliamentary system of government. The monarch is head of state although strictly representative and ceremonial.

The Prime Minister is head of government. The 169-member unicameral Parliament (Stortinget, meaning Grand Assembly) is the supreme legislature with 150 elected from 19 constituencies for 4-year terms. Two referenda on joining the EU just failed in 1972 and 1994.

The Ministry of Petroleum and Energy oversees the oil and gas industry in Norway advised by the Norwegian Petroleum Directorate.

Statoil ASA (now Equinor) is a multinational integrated oil and gas company. It was founded in 1972 as an NOC and acquired its present form in 2007 with the merger of Norsk Hydro. It is now a public company but the Government owns 67% of the shares. Statoil changed its name to Equinor in 2018.