Sri Lanka (the Democratic Socialist Republic of Sri Lanka) is an island with sea borders with India (northwest) and the Maldives (southwest).

Humans date back at least 125,000 years with the indigenous Vedda still present in small numbers. Sinhalese arrived in 543 BC as migrants from Bengal. The Buddhist Anuradhapura Kingdom was created in 380 BC. Invaded many times by other Asian dynasties, all were repelled until 1017 when Tamil Cholas sacked the city, then driven out in 1070 and replaced by the Pollonnaruwa kingdom. In 1215 a new kingdom in Jaffna forced the Sinhalese south.

Many dynasties ruled in the south ended by the Portuguese from 1515. By 1619 Portugal controlled the coastal areas and the Jaffna kingdom. The Netherlands replaced them in 1656, and the UK in 1796. The Sinhalese had formed the inland Kandy kingdom in 1592 but this finally succumbed in 1815.

Now called Ceylon, it was reformed and tea plantations flourished. In 1919 movements for independence began, finally achieved in 1948. The country was renamed Sri Lanka in 1972.

The suppressed Tamils began a 26-year civil war which ended with the violent defeat of the Tamil Tigers in 2009. Sri Lanka now has an economy reliant on tourism, tea, textiles and rice plus overseas worker remittances.

Sri Lanka lies in the Indian Ocean southwest of the Bay of Bengal. It is separated from the Indian subcontinent by the Gulf of Mannar and Palk Strait which is very shallow and includes a string of small limestone islets above sea level.

The main island comprises mostly flat and hilly coastal plains, with the only mountains in the centre where the highest point is Pidurutalagala at 2,524m. Much of the the coastal waters have fringing coral reefs.

Sri Lanka lies on the Indian tectonic plate, formerly part of the Indo-Australian Plate and there are no sedimentary basins onshore except in the extreme northwest and west. Offshore intra-cratonic rift basins of the Cauvery basin (in and north of the Palk Strait), and the Mannar basin (in the Gulf of Mannar), contain thick sequences of Late Jurassic to Recent sediments.

Up to 2011 Sri Lanka had no identified indigenous oil or gas resources. However, 2 wells drilled in the deep waters of the Mannar Basin are reported to have tested gas. These, and others, may eventually become commercial developments but this is unlikely in the short and medium term. Currently Globalshift does not ascribe any gas (or oil) production to the country due to the high commercial risk although this may change should interest by foreign companies in Sri Lanka increase. 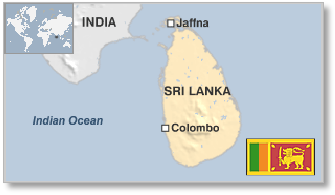 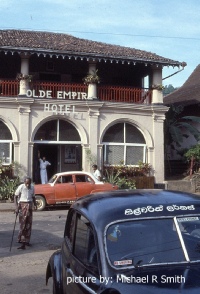 Sri Lanka is governed by a semi-presidential system. The President is elected for a 5-year term and is head of state, commander in chief of the armed forces and head of government.

The President heads the cabinet and appoints ministers from members of parliament. The Parliament is a unicameral 225-member legislature elected for a 5-year term.

The Ministry of Petroleum Resources Development is the policy-making body responsible for oil and gas.

The Petroleum Resources Development Secretariat (PRDS) oversees all aspects of the industry.