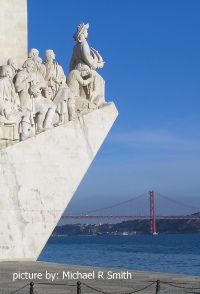 Portugal (the Portuguese Republic) on the Iberian Peninsula is the westernmost country of mainland Europe. It is bordered by the Atlantic Ocean on the west and south, and Spain on the north and east.

The region was settled by Celts after 1000 BC and other tribes who traded with Phoenicians and Carthaginians before incorporation into the Roman empire in 45 BC. In 410 Germans invaded, setting up the Kingdom of the Suebi. They were followed by the Visigoths.

In 711 the Moors took the south, establishing it as part of the Umayyad Caliphate. Replaced by the Emirate of Córdoba until 1031, it split up before being conquered by the Almoravids from Morocco. In the north Christians retained power and in 1139 began to recover all of Portugal.

By 1383 the whole country was ruled by the House of Aviz who built a global empire. Spain intervened from 1580 to 1640, after which the House of Braganza took over.

Destruction of Lisbon in an earthquake in 1755, invasion by Napoleon in 1807, and the independence of Portuguese Brazil in 1822 led to economic decline. In 1910 the monarchy was deposed and a series of dictators ruled until 1974 when the Carnation Revolution restored democracy and the empire was dismantled.

Portugal's economy then expanded and it joined the EU in 1986. Its last overseas territory, Macau, was handed over to China in 1999.

Portugal on the Iberian Peninsula includes 2 archipelagos in the Atlantic Ocean; Madeira and the Azores both with their own governments. Mainland Portugal is divided in two by its main river, the Tagus that flows from Spain. The north of Portugal, north of the Tagus, is mountainous whilst the south is rolling plains.

Portugal has no identified indigenous oil or gas resources. A number of wells have been drilled onshore since 1949 and offshore, in the shallow waters of the Atlantic margin, since 1974 (although none offshore since 1995).

The main sedimentary basin in Portugal is the Lusitanian Basin which has been the site of over 100 wells, mostly onshore. It has similarities to the Jeanne d’Arc basin in Canada but with less Cenozoic cover and late compression from Alpine events. No discoveries have been made possibly due to breaching of potential reservoirs.

Other basins offshore Portugal have been barely explored. They mostly underlie deep waters and probably have the same drawbacks as those of Lusitania. Due to the lack of success the country is not forecast by Globalshift to achieve any oil or gas production in the short or medium term future.

The highest point is Mount Pico on the volcanic island of Pico at 2,351m in the Azores archipelago, straddling the Mid-Atlantic Ridge. The other Portuguese archipelago, Madeira, lies above a hotspot in the Atlantic plate. Neither island groups have suitable geology for hydrocarbon accumulations.

Portugal is a significant importer of gas by pipeline from Algeria and also imports and re-exports LNG. 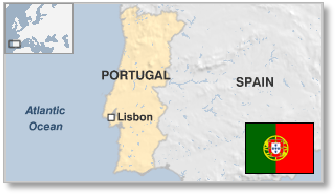 Portugal is a semi-presidential democratic republic. The President is head of state, advised by a Council of State. Parliament is unicameral.

The Prime Minister is head of government and of a 230-member Assembly elected for a 4-year term. In 1986, Portugal joined the EEC, later becoming the EU.

The Ministry of Environment, Spatial Planning and Energy oversees the oil and gas industry in Portugal.

The Galp Energia Group is a part state-owned integrated energy corporation consisting of over 100 companies.

These include SACOR, an oil company operating in the colonies since 1954, and PETROGAL, formed in 1976 from SACOR and 3 other companies. These had been nationalized following the 1974 revolution. Galp was partially listed in 2006.