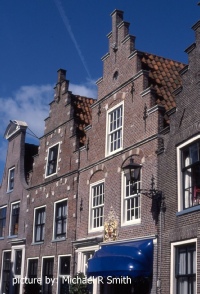 The Netherlands (Kingdom of Netherlands or Holland) borders Germany (east), Belgium (south) and the North Sea (northwest). It has marine borders with Belgium, the UK and Germany and owns 3 overseas territories, Aruba, Curacao and Sint Maarten.

Kingdoms in the area date back to 8000 BC which were overrun by Germanic tribes who mostly avoided Roman rule. The Franks then ruled after Rome collapsed and by 490 AD the south (Belgium) was united as a Frankish kingdom whilst the north comprised mostly Saxons, known as Frisians.

Absorbed into Middle Francia in 843 AD, it was repeatedly invaded by Vikings. Nobles then created private kingdoms in almost continual war with each other but the economy of the region grew through agriculture and land reclamation. Most of these states were united under Burgundy in 1433.

The Spanish Habsburgs ruled up to 1581 when the rich north battled for independence after which the Dutch Empire became a major colonial power. Following a period as a republic under Napoleon the economy stalled but after 1830 agriculture led to sustained growth.

The country was neutral during World War 1 but in World War 2 the Nazis invaded. After the war it reformed and gave independence to most of its overseas territories. The Netherlands is now the world's second largest exporter of agricultural products and has a history of social tolerance.

The Netherlands was formed by the estuaries of 3 rivers and their tributaries, the Rhine (Rijn), the Meuse (Maas) and the Scheldt (Schelde), which once formed natural barriers between the many kingdoms.

Netherlands literally means low countries. Its geography is low-lying and flat with only 50% above one metre. Most of the areas below sea level are man-made due to peat extraction or land reclamation. Since the late 16th century large areas (polders) have been reclaimed now reaching 17% of the land area.  Windmills were used to pump water out of areas below sea level and drain lakes while dikes were built as flood defences. At risk from climate change, there are just a few areas of hills in the southeast (up to a height of 321m) and in the central region.

Conversely gas production from the Southern Gas Basin, onshore and offshore, is significant. The giant onshore Groningen field, which came onstream in 1959, is one of the world’s largest. Smaller onshore fields also produce gas across the country. Offshore gas production began in 1973 with fields widespread adjacent to the UK border.

Although gas output has been on a bumpy plateau for some years decline has now begun and Globalshift expects decline to continue. This has been particularly marked since output from the Groningen field was restricted owing to severe subsidence at the surface. 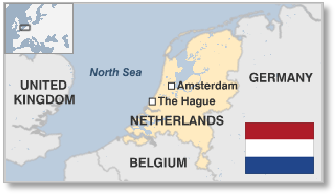 The Netherlands has been a constitutional monarchy since 1815 and a parliamentary democracy since 1848.

The king is head of state but largely ceremonial. Executive power is held by a council of 13 to 16 Ministers. The head of government is the Prime Minister.

The cabinet is responsible to the bicameral parliament (States General). Provincial assemblies elect the 75-member Senate (upper house) which only has the power to reject laws.

The 150-member House of Representatives (lower house) is elected every 4 years.

The Ministry of Economic Affairs oversees the oil and gas industry in the Netherlands advised by the National Mines Inspectorate.

Royal Dutch Shell is an Anglo-Dutch oil and gas company headquartered in the Netherlands and incorporated in the United Kingdom.