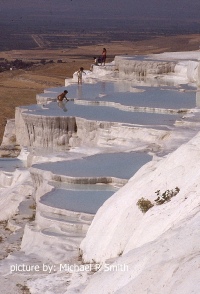 Turkey (the Republic of Turkey) borders Greece and the Aegean (west), Bulgaria, the Black Sea and Georgia (north), Iran, Azerbaijan and Armenia (east), and Iraq, Syria and the Mediterranean (south).

The first Anatolian civilisations are known from 2300 BC. Subsequently Hittites, Assyrians, Greeks, Thracians, Armenians and Persians ruled parts of the country, followed by the Greek, Roman and Byzantine Empires. The east remained under Persia until 651 AD. From 1000 AD Seljuk Turks began arriving from Asia and defeated the Byzantines.

A Mongol invasion in 1243 split these Turks but one group became the Ottomans who, after capturing Constantinople in 1453, created a huge empire. Peaking in the 16th century it began to cede land from 1768, culminating in the Balkan Wars of 1912 and defeat in World War 1.

In 1922 Atatürk expelled the occupying Allies and established the Republic of Turkey. Following World War 2 the country received support from the USA as a bulwark against the Soviets but military coups led to repeated changes of government and in 1984 the Kurds (PKK) began an insurgency campaign.

The country has had strong growth and political stability since the 1980s although in 2016, an unsuccessful coup tried to oust an increasingly autocratic government. Battles with the Kurds continue and the hard line government with internal dissent have slowed growth in its economy since then.

Turkey lies in both Europe (Thrace, 3%) and Asia (Anatolia, 97%). The Bosphorus, Sea of Marmara, and Dardanelles, which together form the Turkish Straits, divide the two. The country is encircled by seas on 3 sides, the Aegean to the west, the Black Sea to the north and the Mediterranean to the south.

Anatolia consists of a high central plateau with narrow coastal plains, between the Köroğlu and Pontic mountain ranges to the north and the Taurus Mountains to the south. Eastern Turkey is located within the western plateau of the Armenian Highlands and contains Mount Ararat, Turkey's highest point at 5,137m. Southeast Turkey is located within the northern plains of Upper Mesopotamia.

The Bosphorus and the Dardanelles owe their existence to faults that created the Black Sea. The North Anatolian Fault runs across the north of the country from west to east, along which earthquakes can occur.

Turkey is only a modest producer. Oil production began in 1947 from the Zagros in the southeast near the border with Iraq and Iran. The only other onshore producing area is Thrace in the west but output here has never been great. The country’s geology is complex and fields are difficult to exploit.

Onshore associated gas production began in 1983 in the southeast. Thrace is gas-prone and there are some small gas fields which came onstream in 1985. There also may be productive shale gas basins in both the southeast and in Thrace.

The Mediterranean and Aegean Seas have no obvious potential apart from small volumes of gas and condensate discovered off Thrace. However, gas fields have been identified in the Black Sea which began producing in 2007. Growth in gas production is forecast by Globalshift which will partly offset Turkey’s significant gas imports. 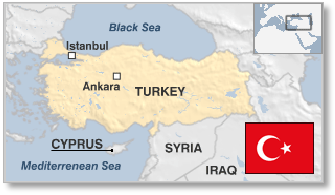 Turkey is a parliamentary representative democracy. The President of the Republic is the head of state, elected for a 5-year term with a largely ceremonial role. Executive power is exercised by the Prime Minister and the Council of Ministers.

Legislative power is vested in the unicameral parliament, the Grand National Assembly with 550 members elected for 4-year terms by proportional representation from 85 districts.

The Ministry of Energy and Natural Resources is responsible for the oil and gas in the country and overseeing the industry.

Türkiye Petrolleri Anonim Ortaklığı (TPAO) (Turkish Petroleum Corporation) is the NOC, founded in 1954 with responsibility for exploration, drilling, production, refining and marketing. Since 1983 it has only been involved in upstream operations.

Turkish Petroleum International Company (TPIC) is a subsidiary which deals with overseas investments.