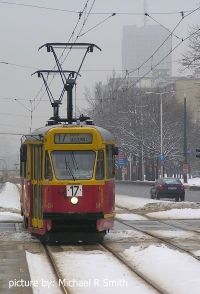 Poland (the Republic of Poland) borders Germany (west), Czechia and Slovakia (south), Ukraine and Belarus (east), and the Baltic Sea, Lithuania and the Russian exclave of Kaliningrad (north).

Ancient tribes were replaced by Slavs after 450 AD and Poland arose as a state in 966 under the Piast dynasty. Founded as a kingdom in 1025, it remained unstable until 1320 when the first king of a unified multi-ethnic Poland was crowned.

In 1386 it united with Lithuania under the Jagiellon dynasty and expanded across the region, winning wars against Ottomans, Tatars and Russians. In 1569 the powerful Polish–Lithuanian Commonwealth was formed. However, internal disorder in the Commonwealth and war with Sweden led to steady loss of land after 1648. It had been fully partitioned by 1795, mostly annexed by Russia.

The country was finally reconstituted as the Second Polish Republic at the end of World War 1 but in 1939 World War 2 began when the Nazis and Soviets both invaded causing terrible destruction.

After the war Poland was forced to become a satellite state of the Soviet Union. In 1980 formation of the Solidarity trade union heralded collapse of the communist regime and in 1989 Poland became a democracy.

The ensuing market economy has created strong economic growth since then, especially after Poland joined the EU in 2004.

Poland south of the Baltic Sea, extending from the Bay of Pomerania to the Gulf of Gdańsk. In the south are two mountain ranges, the Sudeten and Carpathians.The highest part of the Carpathians is the Tatra Mountains, averaging 2,000m along Poland's southern border.

Between these areas are coastal sand dunes and the Northern European Lowlands, hilly districts of moraines and lakes formed during and after the Pleistocene ice age. South of the lowlands lie the regions of Lusatia, Silesia and Masovia which contain broad river valleys originally cut in the ice age.

A desert region stretches over the Coal Fields of Dąbrowa called the Błędów Desert, located in the south.

Oil production from the Carpathians area began in 1854, peaking in 1909. However, this became part of Ukraine after WW2. Output has stayed at low levels although in the last decade there have been increases from fields in western Poland and modest output from the Baltic Sea.

Polish gas production is more substantial, largely from reservoirs similar to the Southern North Sea. Globalshift forecasts output to increase as investment is directed at the country.

Poland also has considerable coal gas and may have shale gas reserves although most Polish gas demand will still need to be met by imports from Russia. Small volumes of gas are produced in the Baltic Sea. 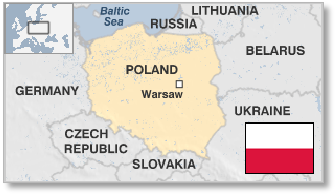 Poland is a representative democracy with the president as head of state elected by popular vote every 5 years.

Government is run by a Council of Ministers, led by a prime minister. The president appoints the cabinet according to proposals of the prime minister.

The bicameral parliament (National Assembly) consists of a 460-member lower house (Sejm) and a 100-member Senate (Senat). Poland became a full member of the EU in 2004.

The Polish Oil and Gas Company (PGNiG) is the state-controlled (72%) company involved in production of gas and oil, import, storage and distribution. PGNiG is one of the largest companies in Poland.

Petrobaltic, founded in 1990, is the state-owned (100%) company producing oil and gas in the Baltic Sea.