Romania borders the Black Sea and Moldova to the east, Bulgaria and Serbia to the south, and Hungary and Ukraine to the north.

Civilisations are recognised in the region from over 8,000 years ago. The region was inhabited by Thracians when overrun by the Romans in 101 AD and it then became the province of Dacia. After Rome left in 271, 3 principalities were slowly established. Transylvania became part of Hungary and Wallachia and Moldavia fell to the Ottomans in 1541.

The principalities united in 1859, naming themselves Romania in 1866, and finally gaining independence in 1877. Romania was stable until invasion by Austro-Hungary in World War 1 after which it was enlarged by treaty, including much of Transylvania. However, after initial growth democracy was steadily eroded during the 1930s.

In World War 2 resource-rich Romania was forced to become an ally of the Nazis. In 1944 a coup led it to switch sides but it remained occupied by the Soviets until the late 1950s, losing parts of its territory but regaining Northern Transylvania from Hungary.

In 1965 the autocratic Ceaușescu took power over the communist republic until a violent Revolution in 1989 led to his execution. Romania regained its democracy and established a market economy.

Following rapid economic growth Romania now has a service economy. It joined the EU in 2007.

The Carpathian Mountains dominate the centre of Romania, with 14 mountain ranges reaching above 2,000m or 6,600 ft, and the highest point at Moldoveanu Peak at 2,544m.

The mountains are surrounded by the Moldavian, Scythian and Moesian platforms to the east and south and the Pannonian Depression to the northwest. The Transylvanian Depression is surrounded by the Carpathian and the Apuseni Mountains. The Danube river forms most of the border with Serbia and Bulgaria, flowing into the Black Sea at the Danube delta.

Elements of the Carpathian Basin are the oldest oil producing regions in the world, where oil production began in 1857 on the Moesian platform and later in the Molasse and Flysch basins of the Carpathian foredeep. Bucharest was the first capital in the world lit by kerosene. Output peaked in 1976 followed by steep decline. Slow decline is expected to continue.

Gas is mainly produced from the Pannonian and Transylvanian Basins with output peaking in 1983. Modest shale gas potential also exists onshore which may slow decline in the future.

Exploration in the Black Sea started in 1969 with the first discovery made in 1980 and production starting in 1987. The waters have several small oil fields in decline. Deep water gas discoveries are due to be developed and there may be some further oil and gas potential remaining unexplored due to border disputes with Ukraine. Globalshift forecasts that new deep water gas fields will reverse offshore output decline. 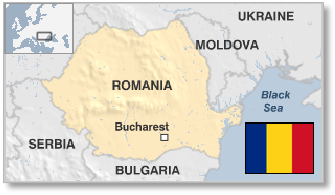 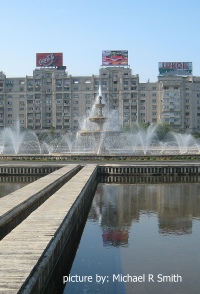 Romania is a semi-presidential republic. The president is elected by popular vote for a maximum of two terms of 5 years and appoints the prime minister, who in turn appoints the Council of Ministers.

Parliament is bicameral. The 137-member Senate and 334-member Chamber of Deputies are both elected every 4 years.

Romania applied in 1993 for membership of the EU and became a full member in 2007.

The oil and gas industry is overseen by the Ministry of Energy including the Energy Regulatory Authority (ANRE). Concession agreements are made with the National Agency for Mineral Resources.

The main producers are dominantly state-owned Romgaz and OMV Petrom. In 2004 Petrom was privatized by the Romanian state and sold to Austrian oil company OMV. It was the largest privatization deal in Romania's history.