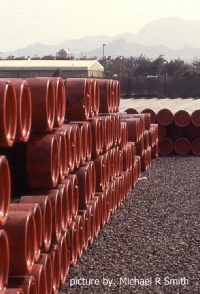 Saudi Arabia was populated by nomadic tribes before Muhammad was born in Mecca in the Hejaz in 571 AD. Tribal leaders then united to create a series of large Arab empires. The Hejaz was under the control of the Sharif of Mecca but the interior (Nejd) remained largely nomadic.

From the 16th century Ottomans claimed the Nejd until the House of Saud emerged in 1744, joining with the Islamic Wahhabi movement. The Ottomans drove them into exile but they returned in 1902, recapturing Riyadh. Supported by the UK, the Sauds then conquered the Ottomans and created an Arab state.

The Sauds progressively took the whole country, uniting it as the Kingdom of Saudi Arabia in 1932. It became an absolute monarchy governed under conservative Wahhabi lines. Oil was discovered in 1938 and the economy is now almost totally dependent on oil exports.

In 1973 Saudi led an oil boycott against any Western countries who supported Israel. However, the country also backed the US in both Gulf wars. The country is repeatedly criticised for its politics and social conditions. In 2011 it was affected by Arab Spring protests as well as a rise in Islamic terrorism. Although now stable it continues to attract international criticism for human rights abuses.

Saudi Arabia occupies 80% of the Arabian Peninsula which formerly consisted of 5 regions; the Hejaz on the west, the Asir in the southwest, the Nejd in the interior, the Al-Ahsa in the east and the Rub' al Khali (Empty Quarter) in the southeast.

Most of the country is inhospitable Arabian desert, associated semi-desert and shrubland. The main topographical feature is a central plateau which rises at an escarpment near the Red Sea and gradually descends into the Nejd. On the Red Sea coast there is a narrow coastal plain, known as the Tihamah. The southwest province of Asir is mountainous with the 3,133 m Mount Sawda, the highest point. The country's southern borders with the UAE and Oman are not precisely marked.

In 1938, oil was discovered in the Al-Ahsa region along the coast of the Persian Gulf. Production of oil in Dammam in 1938 and development of other oil fields from 1941 under the US-controlled Arabian American Oil Company (Aramco) provided Saudi Arabia with prosperity and political leverage internationally. As a member of OPEC, it has often restricted oil output to maintain prices.

Many fields have now been discovered, on and offshore in the Persian Gulf, dominated by the Ghawar field and its offshore extension, Safaniya. These are the largest  fields in the world but require the latest technologies to maintain output.

Saudi Aramco is the only operator in the country, except within the Neutral Zone shared with Kuwait. It continues to invest in projects which, although large, are unlikely to fully offset the decline of Ghawar when it occurs. Many of the newer fields also produce less saleable heavy oil. 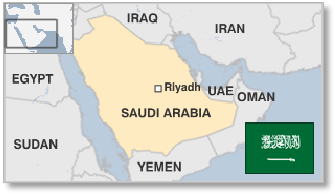 Saudi Arabia is an authoritarian absolute monarchy although the king must comply with Sharia law and the Quran. No political parties or elections are permitted. Outside the Al Saud royal family tribal identity remains strong.

A Consultative Council was established in the early 1990s and a National Dialogue Forum in 2003 but neither has any power. Islamic activists have been the most prominent threat to the government and have perpetrated a number of terrorist acts in the country.

The Ministry of Energy, Industry and Mineral Resources is responsible for policies concerning oil and gas.

Saudi Aramco is the NOC which owns, operates and develops all energy resources in Saudi Arabia. The company was started before World War 2 by a number of large American companies.

In 1950 Aramco agreed to share profits 50/50 with the government which eventually had taken full control by 1980.

Saudi Arabia was a founder member of OPEC in 1960.